Get latest articles and stories on Sports at LatestLY. The 35-year-old, who was instrumental in England's strong showing in limited overs games in recent years, announced his retirement from international cricket on Tuesday. 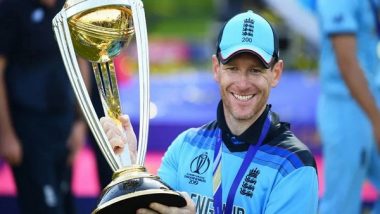 The 35-year-old, who was instrumental in England's strong showing in limited overs games in recent years, announced his retirement from international cricket on Tuesday as the leading scorer for England in ODIs and T20Is.

Also Read | India vs Ireland, 2nd T20I 2022: Andrew Balbirnie, Ireland Skipper Says ‘It's Not Every Day You Get That Close Against a Team Like India’.

ICC Chief Executive Geoff Allardice praised Morgan's innovative batting and astute captaincy while wishing him all the best for the future.

ICC Chief Executive Geoff Allardice in a statement said: "Eoin was an exceptional talent from his early days with the Ireland team and over the years he developed into a top-class batter and captain, leading England's resurgence in limited overs cricket culminating in that quite extraordinary World Cup victory at Lord's in 2019. On behalf of the ICC, I congratulate him for an outstanding career and wish him every success in the next phase of his career."

Morgan scored 99 on ODI debut for Ireland against Scotland in 2006 and played in all three formats after switching over to England in 2009. He was named as England's white-ball captain in December 2014 and led the team to the final of the ICC Men's T20 World Cup in 2016. He also led them to the semifinals of the T20 World Cup last year.

During his 13-year international career with England, the 35-year-old won the ICC Men's Cricket World Cup as Captain in 2019 at Lord's, the first time England Men had won the world crown. He was also a part of the England team that won the 2010 ICC Men's T20 Cricket World Cup in the Caribbean.

Morgan is the all-time leading run-scorer and most-capped player for England Men in both ODI and T20I matches.

During his seven-year tenure as Men's ODI captain, he guided England to number one in the ICC world rankings, including notable series victories against all the major nations.

In his record-breaking 225 ODI caps for England, he scored 6,957 runs, including 13 hundred at an average of 39.75. In his 126 matches as Captain, Morgan oversaw 76 victories with a win percentage of 60 per cent, the best win record by any England Men's ODI Captain in the history of the game.

He captained the Men's T20I side on 72 occasions, equal to India's MS Dhoni as the most in T20 international cricket. In all, he represented England on 115 occasions scoring 2,458 runs. As a Test cricketer, he won 16 caps over a three-year period scoring two centuries.

He also holds the world record for the highest number of sixes in an ODI innings, with 17 against Afghanistan at the 2019 ICC Cricket World Cup. In 2020, he received a CBE for services to cricket. (ANI)