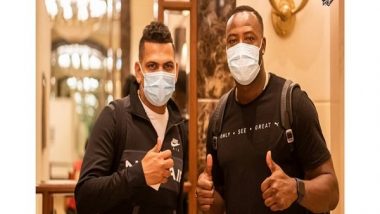 Narine and Russell along with West Indians who were part of the TV production in the suspended IPL reached the Caribbean, informed Windies cricket on Sunday. IPL 2021 Postponed: Suspension of Tournament Due to COVID-19 Is Reminder of Game’s Vulnerability, Says Ian Chappell.

Cricket West Indies CEO Johnny Grave thanked the Board of Control for Cricket in India (BCCI) and IPL teams for arranging their safe travel.

"Our IPL players, along with the West Indians who were part of the TV production, are now safely back in the Caribbean. We are grateful to the @BCCI and IPL Franchises for arranging their safe travel back to the Caribbean so quickly," Windies Cricket tweeted.

Meanwhile, KKR and India pacer Prasidh Krishna has tested positive for COVID-19. He is the fourth player from the franchise after Varun Chakaravarthy, Sandeep Warrier and Tim Seifert to test positive for coronavirus.

Kiwi batsman Seifert is still in India. Once Seifert has undergone treatment and the statutory period of isolation and has tested negative for COVID-19, he will be transferred back to New Zealand where he will undergo the mandatory 14-day period of managed isolation.

NZC chief executive David White said Seifert had returned seven negative tests in the 10 days leading up to his pre-departure protocols and was confident he would be receiving the best of care from his franchise.

"It's really unfortunate for Tim and we'll do everything for him that we can from this end, and hopefully he will be able to test negative and be cleared and approved for discharge as soon as he's well again," White had said in an official statement.