Get latest articles and stories on Sports at LatestLY. West Indies skipper Kieron Pollard said the series defeat at the hands of Ireland is a "tough pill to swallow" for the home side. 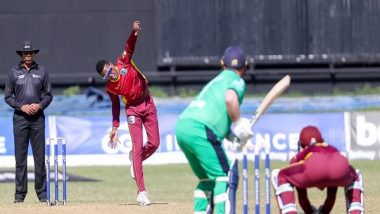 Kingston [Jamaica], January 17 (ANI): West Indies skipper Kieron Pollard said the series defeat at the hands of Ireland is a "tough pill to swallow" for the home side.

With this win, Ireland registered their first-ever ODI series win away from home over an ICC Full Member after recording a two-wicket victory over the West Indies in the final match of the series.

Pollard said it was a sad day for West Indies cricket, having lost the match and series against Ireland.

"It's a sad day for us and sad day for West Indies cricket. Very disappointing and a tough pill to swallow. We have a batting problem in the Caribbean the last couple of years and from a bowling perspective, guys can only defend what we have on the board and they worked their back sides off to get the wickets," Pollard said after the match.

Pollard said the wicket flattened out in the second half and the West Indies were made to work harder because of that.

"Obviously the wicket flattened out in the second half and we had to work harder. It's a holistic sort of approach that needs to take place," said Pollard.

The West Indies skipper said the team needs to sit down and think deeply about the side following the defeat against Ireland.

"The guys are trying to get better and it won't happen overnight and it's not gloom or doom and it's a matter of putting our heads together and we really need to sit down and think deep about where we need to take the West Indies cricket forward," said Pollard.

West Indies had won the first ODI but Ireland came back strongly to register back-to-back wins.

West Indies were folded for 212 in the 45th over and Ireland survived a late batting collapse to get over the line in the third ODI. (ANI)