The CPL 2020 is all set to become the first major cricket league to start amid the coronavirus pandemic and it is going to take place in Trinidad & Tobago, starting August 18. 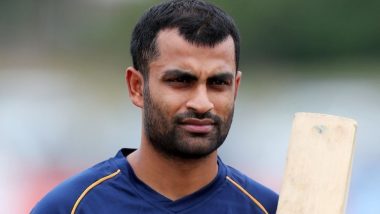 Dhaka, July 15: Bangladesh players Tamim Iqbal and Mahmudullah have announced that they have declined offers from Caribbean Premier League (CPL) teams. The Windies T20 tournament is slated to be played from August 18 in Trinidad and Tobago behind closed doors.

"I was very close to signing with one of the teams but my family is my main concern, and they are also worried about me traveling during this time. I have played in the CPL previously and have always enjoyed my experience there," ESPNCricinfo quoted Mahmudullah as saying.

On the other hand, Tamim has said that he opted out of the tournament because it will clash with the potential August restart of Bangladesh's domestic one-day tournament, the Dhaka Premier League.

"One of the teams approached me but since our domestic competition could start any time, that's why I decided not to go," ESPNCricinfo quoted Tamim as saying. Bangladesh Tour Of Pakistan 2020.

Both Tamim and Mahmudullah have appeared in previous editions of the CPL. The CPL 2020 is all set to become the first major cricket league to start amid the coronavirus pandemic and it is going to take place in Trinidad & Tobago, starting August 18.

The CPL will have a full season and will feature overseas and Caribbean players with the standard higher than it has ever been with the likes of Rashid Khan, Chris Lynn, Carlos Brathwaite, Dwayne Bravo, Alex Hales and Kieron Pollard all set to take part.

Last year's CPL had a combined broadcast and digital viewership of 312 million and with the tournament being the first franchise T20 event to take place in several months there will be more interest than ever.

"The CPL has worked with the Trinidad & Tobago Ministry of Health and the CPL's own board of medical advisors to create protocols which minimize the risk of transmission of the COVID-19 virus to the population of Trinidad and in amongst those who will be travelling to Trinidad & Tobago from overseas," the organisers had said in a statement.

"All teams and officials will be housed in one hotel and everyone will be subject to strict quarantine protocols for the first two weeks they are in the country. Everyone travelling from overseas will be tested for COVID-19, before departure and then again on arrival in Trinidad," it added.

Teams and officials will be put into "households" where social distancing will need to be in place. There will be smaller clusters within each household where these measures can be relaxed.

However, if any member of this cluster display signs of COVID-19 at any time during the tournament all members of that cluster will be expected to self-isolate for a period of 14 days from the time that a member of that cohort first shows symptoms.

All members of the CPL party will be subject to regular temperature checks and will be re-tested for the virus throughout their stay in Trinidad and again before departure.