Indian wrestler Anshu Malik bows out of Tokyo 2020 after losing to Russian Olympic Committee's Valeria Koblova in the Women's freestyle 57 kg repechage here at Makuhari Messe Hall A Mat B on Thursday. 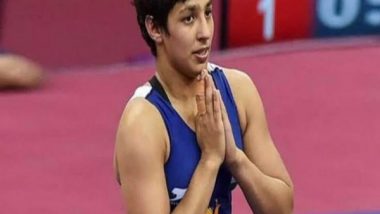 Celebrating her 20th birthday, Anshu started the match on the front foot but the Rio 2016 silver medalist held her defence as she took a narrow 1-0 lead going into the second half of the bout.

Valeria Koblova got her second 'shot clock' in the second half which saw Malik opening the scoring in the match. In the last 30 seconds of the match, Koblova turned the match into its head as she captured 4 points and progressed into the bronze medal bout.

Earlier on Wednesday, Anshu lost to Belarus' Iryna Kurachkina in the 1/8 Final event. Iryna defeated Anshu 8-2 to advance in the quarter-finals and later into the final which gave the Indian the chance for repechage. (ANI)