According to Mashable, Google's big announcement at I/O last month was the beginning of a partnership with Samsung on Wear OS; and going by the recent statements from Samsung, the new smartwatches could be launched at the MWC 2021 event. 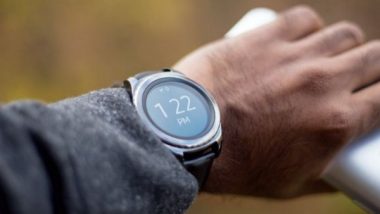 Washington, June 14: South Korean tech giant Samsung has recently announced that they will host an event around smartwatches at the upcoming MWC Barcelona (Mobile World Congress) annual event on 28th June at 10:45 pm IST. This could possibly hint that a new Galaxy Watch related to Samsung- Google partnership may launch soon.

According to Mashable, Google's big announcement at I/O last month was the beginning of a partnership with Samsung on Wear OS; and going by the recent statements from Samsung, the new smartwatches could be launched at the MWC 2021 event.

The listing of the brands and shows that will take place at the MWC event is listed on the official website of the Mobile World Congress. Going by the list, Samsung is expected to tell the world more about the 'Galaxy ecosystem' as well as the 'new watch experience'. Samsung also noted that the company is in the works of 'reimagining smartwatches'. Samsung Galaxy M32 India Launch Confirmed for June 21, 2021; Check Expected Prices, Features & Specifications.

If the refreshed version of Wear OS gets launched at the event, then it will be marked as the first non-Tizen smartwatches from Samsung in years, as per Mashable. As per the official site, users could witness either the launch of a new Samsung Galaxy Watch or a session that shows more of WearOS and Samsung's role in the new partnership.

MWC is a tech expo where both the tech giants Google and Samsung participate and fascinate their fans with their new endeavours. Due to the pandemic, both the companies had withdrawn from physical participation in this year's edition over concerns of staff health.

As per Mashable, speaking of notable leaks around the Galaxy Watch 4 lineup, Ice Universe did reveal more mid-way through May. The reports say that "the Galaxy Watch Active 4 will likely feature a new 5nm processor, a titanium alloy frame and 2D glass on top. It also mentions that Samsung won't be taking 'Tizen' off the name of its smartwatch software completely. In fact, TizenWear OS is the name Samsung could settle for."