According to Variety, Pete in his Instagram post claimed that he's been told not to show up at the studio, either, even though he comes up with a legitimate medical reason for not getting the jab. 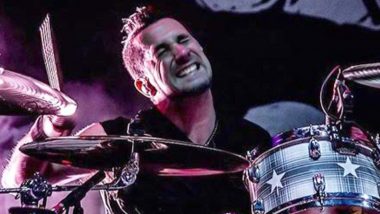 Pete Parada, the drummer for The Offspring, recently revealed that he was asked to leave the band over his refusal to receive a coronavirus vaccine. According to Variety, Pete in his Instagram post claimed that he's been told not to show up at the studio, either, even though he comes up with a legitimate medical reason for not getting the jab. "Given my personal medical history and the side-effect profile of these jabs, my doctor has advised me not to get a shot at this time. Friends Star Jennifer Aniston Says She Has Cut Ties With People Who Refused to Get Vaccinated.

I caught the virus over a year ago, it was mild for me -- so I am confident I'd be able to handle it again, but I'm not so certain I'd survive another post-vaccination round of Guillain-Barre Syndrome, which dates back to my childhood and has evolved to be progressively worse over my lifetime. Unfortunately for me, (and my family -- who is hoping to keep me around a bit longer) the risks far outweigh the benefits," he wrote. PVR Cinemas to Reopen Its Theatres in These States From July 30 With 100% Vaccinated Staff.

Revealing how that affects his status in the band, Pete explained: "Since I am unable to comply with what is increasingly becoming an industry mandate -- it has recently been decided that I am unsafe to be around, in the studio, and on tour. I mention this because you won't be seeing me at these upcoming shows." After updating his fans about the issue, Pete also said that he has no hard feelings for his other bandmates and he has not posted out of anger.

"I have no negative feelings towards my band," he wrote. "They're doing what they believe is best for them, while I am doing the same.

Wishing the entire Offspring family all the best as they get back at it! I'm heartbroken not to be seeing my road community, and I will miss connecting with the fans more than I can express in words," he added. Pete was the band's second longest running drummer in the group's 37-year career, having replaced Atom Williard in 2009.