The multibillion-dollar bill titled America COMPETES Act represents the strongest congressional action yet to counter a rising China, said an editorial published in a Washington based news publication. 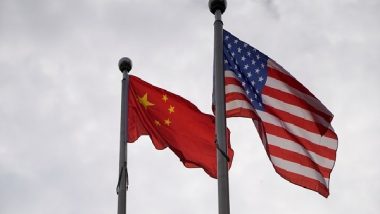 Washington, February 4: The multibillion-dollar bill titled America COMPETES Act represents the strongest congressional action yet to counter a rising China, said an editorial published in a Washington based news publication.

The US House of Representatives this week advanced this 3,000-page bill aimed at increasing American competitiveness with China. The legislation, which was unveiled last month, would attempt to surge production of American-made semiconductors, tackles supply chain vulnerabilities, and strengthen its economic and national security. China in Illegal Occupation of About 38,000 Sq km of Indian Territory, Says Govt in Lok Sabha.

In an editorial pushed in The Hill newspaper, the publication argued that it may be too much to hope that this bill passes along the same bipartisan lines as its Senate counterpart did in June 2021, but Speaker Nancy Pelosi's control over her caucus ensures that the bill will pass along party lines. Also Read | Ukraine Conflict Affecting Children's Mental Health, Says UNICEF Report.

"The bigger challenge for Pelosi and House Democrats will be ensuring that key portions of their ambitious bill survive what is sure to be a contentious Senate back-and-forth over which programs move forward and which are left behind on the cloakroom floor," the editorial said.

The America COMPETES Act would elevate US leadership in international forums and on global issues to counter China's efforts to undermine global rules.

"America COMPETES makes historic investments to strengthen America's economy, security, and global leadership. To compete effectively with the People's Republic of China (PRC), the legislation leverages our core strengths and values, and presents a positive, whole-of-government agenda that rises to the challenges and opportunities of the twenty-first century," said House Foreign Affairs Committee Chairman Gregory Meeks had said in a press release.

The bill would mandate the creation of a USD 52 billion semiconductor chip fund to incentivize private-sector investments that help address supply chain disruptions and produce more semiconductors domestically. The legislation would also authorize USD 45 billion to improve US supply chains and prevent shortages of critical goods by ensuring more critical goods are made in the country.

It also calls for an increase of US State Department personnel and resources devoted to the Indo-Pacific, as well as to regional and international organizations to boost multilateralism and global rules.

Furthermore, the legislation asks for refugee protections for Uyghurs and Hong Kongers who have been persecuted by China, and provisions to hold China accountable for its human rights violations.