Rain in some parts of central and southern China has hit record highs in recent weeks. A new round of heavy rainfall will be seen in the southern parts of the country from Tuesday to Friday. 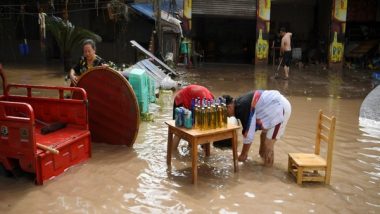 Beijing, June 1: China is bracing for a flooding season as water levels in many rivers have exceeded warning levels following a series of heavy rainfall. Rain in some parts of central and southern China has hit record highs in recent weeks. A new round of heavy rainfall will be seen in the southern parts of the country from Tuesday to Friday.

Global Times reported that China has entered the main flooding season with the water level of Poyang Lake, known as the "Kidney of Yangtze River," has reached 18 meters, approaching the 19-meter flood warning level, more than a month earlier than previous years, according to observation from the Institute of Aerospace Information Research Institute of the Chinese Academy of Sciences on Monday.

In Hunan, local water resources authorities and the Hydrological Bureau of the Yangtze River jointly carried out an emergency monitoring exercise at the section of the river along the Xiangjiang River on May 26 in response to flood warnings, said MOWR on Monday.

The exercise was aimed at simulating a situation in which heavy rains cause excessive floods to occur in the lower reaches of the Xiangjiang River, leading to a bank collapse that eventually leads to water flooding into cities and causing pollution incidents.

The ministry said on May 24 that it had made sufficient preparations to cope with the coming flooding season. South China has seen heavy rainfalls and rising water levels in major rivers since the middle of May.

Last year, crippling floods killed hundreds of people and displaced millions across the central and southwestern parts of the country. Since 1950, China has witnessed three of the world's 10 most destructive floods. Flooding in cities is a worrying trend and getting worse, a sign of failure to execute urbanisation policies.