Coming from the WHO chief with whom China had built a close rapport while battling the allegations that it suppressed facts related to the deadly virus early and acted late in containing it in Wuhan the assertion that it requires further probe caught Beijing by surprise. 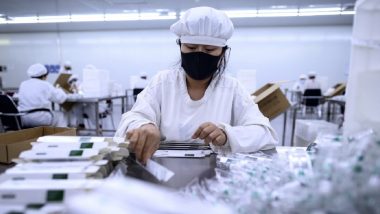 Beijing, March 31: China on Wednesday called for expanding the search for the origins of the coronavirus in other countries, mainly America, as it sought to sidestep the WHO chief's assertion that further probe is required on allegations that the deadly virus may have leaked from a bio-lab in Wuhan, saying he may have not been accurately quoted.

Releasing the much-awaited report of an experts team which probed the origin of COVID-19 after visiting the controversial Wuhan Institute of Virology (WIV) in the central Chinese city of Wuhan, World Health Organisation chief Dr Tedros Adhanom Ghebreyesus reopened the Trump era allegation, saying that it required further probe.

"Although the team has concluded that a laboratory leak is the least likely hypothesis, this requires further investigation, potentially with additional missions involving specialist experts, which I am ready to deploy,” Dr Tedros, who was earlier accused by the previous Trump administration as ‘pro-China', said in Geneva on Tuesday. WHO Experts Report Says It Has 'Not Yet' Found Source of COVID-19 in Wuhan; Calls for Further Studies.

Coming from the WHO chief with whom China had built a close rapport while battling the allegations that it suppressed facts related to the deadly virus early and acted late in containing it in Wuhan the assertion that it requires further probe caught Beijing by surprise.

"I don't think the quote is very accurate because what I see is the expert mission said they cannot exclude the possibility of lab leakage but they have found no scientific evidence for that," Chinese Foreign Ministry spokesperson Hua Chunying said while answering a volley of questions on the experts team report and Dr Tedros' comments. Instead, Hua harped on the expert team's remark that the lab leak theory is "extremely unlikely".

Hua pointed to China's oft-repeated charge that the virus has emanated from outside China which points finger at a US bio lab at Fort Detrick in Maryland which Beijing says should be opened for a probe by WHO experts team to ascertain whether it has any link to coronavirus.

"If necessary we should conduct study in other places and we hope if necessary those countries can cooperate with WHO experts in an open and transparent manner just like China did. We believe this is in interest of the world," she said.

In response to the WHO report, the US and 13 allies including South Korea, Australia and the UK, voiced concern over its findings and urged China to provide "full access" to experts.

BBC quoted a statement by the 14 countries stating that the mission to Wuhan was "significantly delayed and lacked access to complete, original data and samples". COVID-19 Leak from China's Wuhan Lab 'Extremely Unlikely': WHO Report.

"Scientific missions like these should be able to do their work under conditions that produce independent and objective recommendations and findings." The group pledged to work together with the WHO.

Former US president Donald Trump was among those who supported the theory that the virus might have escaped from a lab in China. Contrary to expectations, the experts team's report left almost all questions, including that virus emanating from the wet market in Wuhan which was shut down, unanswered.

"I would say that in the joint study of the expert mission visited several installations in Wuhan including WIV, bio safety labs and had in-depth candid exchanges with Chinese experts," Hua said.

"Through their visit, they came to the conclusion that it is extremely unlikely that the virus leaked from the lab. This is one important scientific conclusion reached by the joint mission which issued the report," she said.

When asked whether China would permit a second WHO experts team to visit Wuhan and WIV lab, she said, "I have never said China will not allow joint research. It is not an investigation by the way." On the possibility of the lab leakage, she said that if necessary, the experts team will also conduct the research around the world.

"Relevant study is done in Wuhan lab, when will Fort Detrick will be opened to experts?" she said. On the US and EU allegation of data manipulation, Hua said it is groundless. She said China had mobilised relevant institutions and deployed hundreds of scientists to collect raw data and showed it to the experts' team.

But at the same time, she said, some information cannot be copied or taken outside China according to China's security laws. She also rebutted allegations by the US and several other countries that China tried to interfere with the WHO expert groups probe.

"The so-called accusation is groundless. Experts had positive evaluation of China's transparency. Outsiders who are not part of origin tracing work are accusing the experts group of interference. This is irresponsible. This caters to rumours and gathers a political agenda," she said.

"This is very clear as some western counties whenever they see something that does not meet their expectations they come up with such allegations. Their accusation will collapse in front of the truth,” she said.