China Tried to Warn US Off Strengthening Quad, Reveals US President Joe Biden

The US has been favouring Quad as a security architecture to check China's growing assertiveness. 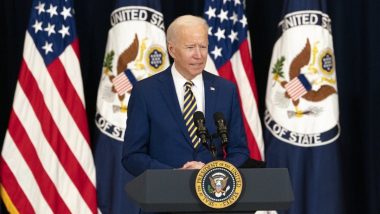 London, June 14: US President Joe Biden has revealed how China tried to warn him off strengthening the Quadrilateral Security Dialogue, referred to as the Quad as an informal strategic partnership between India, Japan, Australia and the United States.

Addressing a press conference at the conclusion of the UK-hosted G7 Summit in Cornwall on Sunday, the President who took charge in the White House earlier this year said that in his conversation with a Chinese leader he was asked about his international relations plans before he assumed the presidency. Biden did not reveal the identity of the Chinese leader.

Chinese President Xi Jinping spoke to Biden for two hours in February, days after he assumed office as the US President. On February 11, President Biden said: "Last night, I was on the phone for two straight hours with Xi Jinping. And you all know as well as I do, these folks - and it was a good conversation. I know him well. We spent a lot of time together over the years I was Vice President." US President Joe Biden Congratulates Israel's New PM Naftali Bennett on Phone Call.

“When I was asked what I was going to be doing after being elected, I said we're going to re-establish the strength of American relationships so we can be counted on again…,” Biden recalled on Sunday of the meeting with the unidentified Chinese leader.

Known as the "Quadrilateral Security Dialogue,” representatives for the four member nations have met periodically since its establishment in 2007. Interestingly, Biden hosted the first virtual summit of Quad leaders on March 12.

During the summit, President Biden told leaders of the coalition that a "free and open" Indo-Pacific is essential to their countries and vowed that his country was committed to working with its partners and allies in the region to achieve stability.

The Quad member states have been resolving to uphold a rules-based international order in the Indo-Pacific amid growing Chinese assertiveness in the region.

The Quadrilateral alliance is often projected in the official media in China as an alliance against the Communist giant's rise. China's military and the foreign ministry have repeatedly criticised the Biden administration for continuing the Trump era "Indo-Pacific strategy", saying the US should not form "cliques" or provoke "new Cold War" featuring bloc confrontation.

In November 2017, India, Japan, the US and Australia gave shape to the long-pending proposal of setting up the Quad to develop a new strategy to keep the critical sea routes in the Indo-Pacific free of any influence. The US has been favouring Quad as a security architecture to check China's growing assertiveness.

China claims sovereignty over all of the South China Sea. Vietnam, Malaysia, the Philippines, Brunei and Taiwan have counter claims. China is engaged in hotly contested territorial disputes in both the South China Sea and the East China Sea. Beijing has built up and militarised many of the islands and reefs it controls in the region. Both areas are stated to be rich in minerals, oil and other natural resources and are also vital to global trade.

"I think we're in a contest — not with China per se, but a contest with autocrats, autocratic governments around the world, as to whether or not democracies can compete with them in the rapidly changing 21st century,” he said.

"You're going to see just straightforward dealing with China. And again, we're not looking — as I've told Xi myself, I'm not looking for conflict. Where we can cooperate, we'll cooperate. Where we disagree, I'm going to state it frankly, and we are going to respond to actions that are inconsistent,” noted Biden, in response to a question on China.

The US President on Sunday also highlighted American leadership of the "Build Back Better" theme across the fields of transitioning the world to cleaner energy sources on an urgent basis and also fighting corruption and cyber threats at a global level. On the issue of the COVID-19 pandemic and vaccinations, Biden made a special reference to India's role in the global vaccination drive.

"This is a gigantic logistical effort… we are also providing the ability for other countries to manufacture their vaccines. We've all agreed on that. India has the capacity to do that. They don't have the material capacity thus far to do the manufacturing. But there's a lot going on to provide — not only to, quote, 'give' vaccines, but to provide the ability of the countries in question to produce their own vaccines," he said.