Get latest articles and stories on World at LatestLY. China's growing influence poses a threat to the dominance of the existing superpower country, the US and also threatens the peace and security in the Indo-Pacific region. 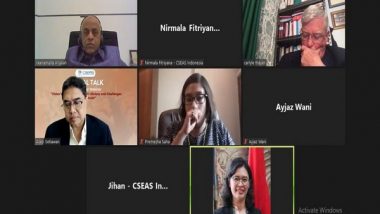 Beijing [China], July 2 (ANI): China's growing influence poses a threat to the dominance of the existing superpower country, the US and also threatens the peace and security in the Indo-Pacific region.

"China has become the world's second-largest economy, third strongest military power and global hegemony in the 21st century. It is challenging the dominance of the existing superpower the USA," Center for Southeast Asian Studies (CSEAS) Indonesia said in a press release.

Center for Southeast Asian Studies (CSEAS) Indonesia on Friday organized an international webinar, titled "China's ruling party at 101: History and challenges for the world", where eminent scholars from Australia, India and Jakarta participated.

CSEAS has chosen July 1 for its webinar as it coincides with the birthday of the Chinese Communist Party, which was established on July 1, 1921.

According to the statement, during the webinar, the speakers exposed the dangers posed by an assertive China to the world and also discussed the current tensions in the South China Sea, and China's aggressive behaviour with Japan, Taiwan, India and Australia.

The speakers also exposed the dangers of China's debt-trap diplomacy and discussed the implications of the Association of Southeast Asian Nations (ASEAN) dependency on China.

"China claims more than 90 per cent of the South China Sea (SCS), including a certain portion of Indonesia's exclusive economic zone (EEZ) in the North Natuna Sea. It has serious problems with Taiwan, Japan, India, Australia and other countries," the statement reads.

The statement also pointed out that to increase its influence in the world, China launched the Belt and Road Initiative (BRI) in 2013. With an estimated investment of USD 1 trillion, China has expanded its influence in more than 68 countries in Asia, including Indonesia, Africa, Europe and South America through BRI.

It is pertinent to mention that the Chinese Communist party is 101-year-old and adopted predatory economic practices like providing huge subsidies, low taxes and cheap finances to Chinese companies.

According to the statement, China has given huge loans for unnecessarily unproductive projects, which is nothing but a seductive trap for various countries. "Like a house of play cards, many countries one after the other are collapsing economically as they do not have any money left to repay Chinese debts. Sri Lanka, Pakistan, Laos, Myanmar, Cambodia and many others are examples of the victims of China's debt-trap diplomacy," the statement reads.

According to the statement, China is now making more nuclear bombs, hypersonic missiles and aircraft carriers, threatening the peace and security in the Indo-Pacific region and igniting an arms race in Asia.