The trial was conducted at more than 170 sites in countries including the United States, the United Kingdom, Japan, Taiwan and South Africa. Of the study participants who received a placebo, 14.1 percent were hospitalised or died by the last day of the trial. 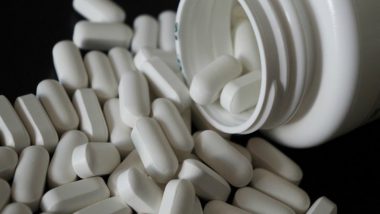 Washington, October 1: An antiviral pill has been found to reduce the risk of hospitalisation and deaths by 50 per cent in patients diagnosed with COVID-19 during clinical trials. The drug, which is made by US firm Merck and Ridgeback Biotherapeutics, is called Molnupiravir. It has proven to be consistently effective against all strains of COVID-19, including the highly contagious delta variant, The Hill reported.

The company said it plans to submit an application for emergency use authorisation to the United States Food and Drug Administration (FDA) as soon as possible based on the trial's results. If granted the authorization, Molnupiravir could be the first oral antiviral treatment for COVID-19, Merck's statement noted.

An analysis of phase three trials found that 7.3 per cent of patients treated with Merck's drug were hospitalised within 29 days, according to the company's Friday statement. Post-COVID-19 Effects: Elderly Persons More Prone to Depression in Post-Coronavirus Times.

Every participant in the study was unvaccinated and had at least one underlying health condition that increased their chances of developing a more serious case of COVID-19. Some of the most common health factors among participants included obesity, diabetes, heart disease and being over the age of 60.

The trial was conducted at more than 170 sites in countries including the United States, the United Kingdom, Japan, Taiwan and South Africa. Of the study participants who received a placebo, 14.1 percent were hospitalised or died by the last day of the trial.

"This is a phenomenal result, I mean this is a profound game-changer to have an oral pill that had this kind of effect," former Food and Drug Administration (FDA) Commissioner Scott Gottlieb said on CNBC.

"With these compelling results, we are optimistic that Molnupiravir can become an important medicine as part of the global effort to fight the pandemic and will add to Merck's unique legacy of bringing forward breakthroughs in infectious diseases when they are needed most," Robert M. Davis, CEO and president of Merck, said in a statement. Australia To Lift 18-Month COVID-19 Travel Ban on Its Vaccinated Citizens From November 2021.

"Consistent with Merck's unwavering commitment to save and improve lives, we will continue to work with regulatory agencies on our applications and do everything we can to bring molnupiravir to patients as quickly as possible," Merck added.