Get latest articles and stories on World at LatestLY. External Affairs Minister Dr S Jaishankar spoke to his Kuwait counterpart Dr Ahmed Nasser Mohammed Al-Sabah and discussed regional situations ranging from West Asia and the Gulf to Afghanistan and the Indo-Pacific. 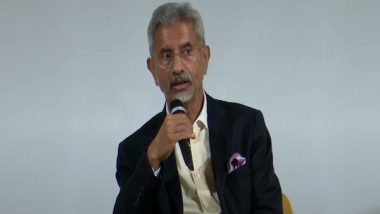 Both the leaders also reviewed bilateral ties between the two countries and agreed on an early meeting of their Joint Commission.

"Nice to talk to FM @anmas71 of Kuwait. Reviewed the progress in our bilateral relationship. Agreed on an early meeting of our Joint Commission. Also talked about regional situations ranging from West Asia and the Gulf to Afghanistan and the Indo-Pacific," Jaishankar tweeted.

Both the counterparts also discussed bilateral, economic and energy cooperation between India and Qatar.

"A good conversation today with DPM and FM of Qatar @MBA_AlThani_. Included an exchange of views on developments relating to Afghanistan. Also spoke on our bilateral, economic and energy cooperation. Look forward to the meeting of our Joint Commission," Jaishankar said in a Tweet. (ANI)