Get latest articles and stories on World at LatestLY. With the Sri Lankan economy overburdened with Chinese loans, as per the experts, other countries in the region also need to call upon their own governments to draw the necessary lessons from the Island nation. 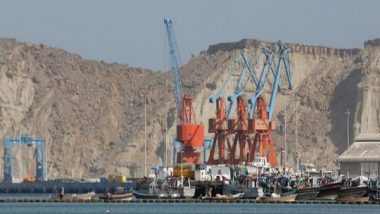 Colombo [Sri Lanka], May 13 (ANI): With the Sri Lankan economy overburdened with Chinese loans, as per the experts, other countries in the region also need to call upon their own governments to draw the necessary lessons from the Island nation.

Dr Rasul professor in the Department of Economics at the International University of Business Agriculture and Technology (IUBAT) cautioned against overdependence on foreign loans, which he felt could make countries vulnerable, reported EFSAS (European Foundation For South Asian Studies).

Md. Maruf Mozumder in his article in The Daily Observer also recommended strongly that Bangladesh draw serious lessons from Sri Lanka. He suggested that Sri Lanka's tendency to sometimes lean more towards China than India was problematic, adding that "it is important to note that due to Debt Trap diplomacy, China is building a geopolitically strong position with huge profits by providing small loans to developing countries in South Asia".

Sri Lankan leaders have promoted large-scale investments from China which has boosted Beijing's debt-trap diplomacy. Not only this, while addressing the Sri Lankan media, China's Ambassador to Colombo Qi Zhenhong criticized Sri Lanka's decision to approach the Washington-based International Monetary Fund (IMF) to bail it out.

This becomes clear that China has contributed to Sri Lanka's current devastating economic crisis. Even when China was asking Sri Lanka to not seek the support of the US, China itself has not provided an alternative to the nation to help it pull out of the economic crisis.

The economic catastrophe has caught the attention of experts across South Asia. It has led to debates and suggestions on what other countries needed to do to avoid turning into another Sri Lanka, as per the outlet.

Sri Lanka's situation is also marred by years of Rajapaksa's rule in the island nation. Dr Golam Rasul says that a multiparty democratic system is critically important in any country.

Dr Rasul pointed to other important lessons for Bangladesh from the Sri Lankan situation. He wrote that economics and politics were interrelated and influenced each other, and quoted Nobel laureate Milton Friedman while asserting that political freedom was fundamental for economic freedom.

He warned against gaining political popularity at the cost of macroeconomic stability, which he felt will lead to a vicious 'economic crisis-political instability' cycle. (ANI)