Hitting out at China for the second time in the last two days, US Vice President Kamala Harris called upon the international community to challenge Beijing's "bullying" and excessive maritime claims in Indo-Pacific. 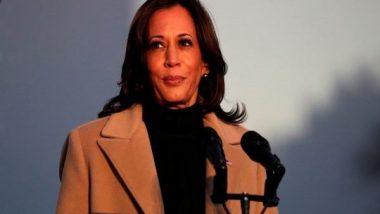 Hanoi, August 25: Hitting out at China for the second time in the last two days, US Vice President Kamala Harris called upon the international community to challenge Beijing's "bullying" and excessive maritime claims in Indo-Pacific.

"We need to find ways to pressure and raise the pressure on Beijing to abide by the United Nations Convention on the Law of the Sea" -- a reference to the U.N. treaty that establishes all maritime activities around the world -- "and to challenge its bullying and excessive maritime claims," Voice of America quoted Harris as saying ahead of a bilateral meeting with Vietnamese President Nguyen Xuan Phuc. Also Read | Indonesia Approves Sputnik V for Emergency Use, Becomes 70th Nation To Authorise the Russian COVID-19 Vaccine.

This comes amid growing tensions in Indo-Pacific with China's increasing military activities in the South China Sea. On Tuesday too, Harris ripped into China, saying Beijing continues to "coerce, to intimidate, and to make claims to the vast majority of the South China Sea". Also Read | Samsung Electronics To Expand AI-Equipped Products With 'Memory Super Gap' Strategy.

"These unlawful claims have been rejected by the 2016 arbitral tribunal decision. And Beijing's actions continue to undermine the rules-based order and threaten the sovereignty of nations," she said.

Reacting sharply to Harris' remarks, Chinese state media accused the US vice president of seeking to drive a wedge between China and Southeast Asian nations with comments in Singapore that Beijing used coercion and intimidation to back its unlawful the South China Sea claims.

China claims sovereignty over almost the entire South China Sea and has overlapping territorial claims with Brunei, Malaysia, the Philippines, Vietnam and Taiwan.

China has been increasing its maritime activities in both the South China Sea and the East China Sea over the past few months, partly in response to Beijing's concerns over the increasing US military presence in the region because of escalating Sino-US tensions.

The US Navy in recent months has conducted regular "freedom of navigation" operation through the disputed waters. China's "nine-dash line" territorial claim covers 90 percent of the 3.5-million-sq. km South China Sea, despite the Permanent Court of Arbitration in The Hague ruling against the claim in 2016.