Another audio recording featuring Pakistan Tehreek-e-Insaf (PTI) Chief Imran Khan surfaced on Friday in which the former Prime Minister is heard talking about 'buying' MNAs, according to the Express Tribune. 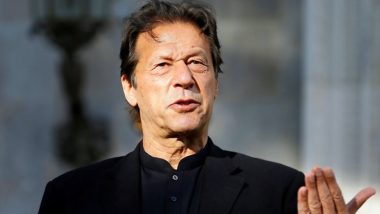 Islamabad, October 7: Another audio recording featuring Pakistan Tehreek-e-Insaf (PTI) Chief Imran Khan surfaced on Friday in which the former Prime Minister is heard talking about 'buying' MNAs, according to the Express Tribune.

As per the Express Tribune, the PTI Chief is apparently talking about 'horse-trading' - a political practice involving 'buying' MNAs before crucial votes in the assembly. "From this point onwards, the next 48 hours is a long long time. Plenty of things are happening and I am also making some moves which we can't disclose to the public," says the voice attributed to the former Pakistan prime minister.

"I am buying five [MNAs], I have five [MNAs]," the voice believed to be of Imran Khan added. Imran Khan recently challenged the coalition government led by Pakistan Muslim League (N) to arrest him as the audio leak controversy continues in Pakistan. US President Joe Biden Warns of Vladimir Putin’s Nuclear Threat, Says Biggest Risk of 'Armageddon' Since Cuban Missile Crisis.

A series of audio clips have been leaked over the last week, featuring Prime Minister Shehbaz Sharif, PML-N leader Maryam Nawaz and former PM Imran Khan, which sparked widespread criticism from the opposition and raised questions about the cyber security of the house. One of the leaked audio in which PM Sharif, Interior Minister Rana Sanaullah, Defence Minister Khawaja Muhammad Asif, Sardar Ayaz Sadiq and others were heard discussing PTI's resignations.

In that audio, the leader also talked about 'London's permission' to accept the resignations. Earlier, Imran Khan's audio leaked where he was heard speaking about the "US conspiracy" as the PTI chief said, "Let's play with it".

It is pertinent to mention that "US conspiracy" refers to the foreign conspiracy which Imran Khan termed as a conspiracy by the US to topple the PTI government and replace it with Shehbaz Sharif's government in Pakistan.

According to The News International, in the latest leaked audio, Imran Khan could be heard directing his then-principal secretary that they should play with the "cypher issue without taking the name of the United States."

The cypher is an alleged secret diplomatic cable which fuelled conspiracy theories that the US administration wanted to topple Imran Khan's government and facilitate regime change in the country. The cypher is based on then-envoy Asad Majeed's meeting with US State Department official Donald Lu, who has been at the centre of PTI's claim that the US conspired to dislodge Imran from office in April.