The Russian foreign minister has warned the West that if it provides Ukraine with long-range rockets, Moscow will respond by taking over larger areas of Ukraine. 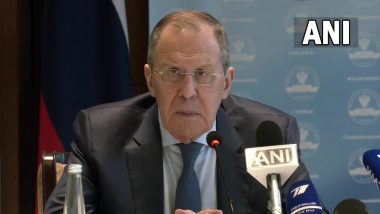 Moscow, June 6: The Russian foreign minister has warned the West that if it provides Ukraine with long-range rockets, Moscow will respond by taking over larger areas of Ukraine. Speaking during an online news conference Monday, Sergey Lavrov said that “the longer the range of weapons you supply, the farther away the line from where neo-Nazis could threaten the Russian Federation will be pushed.”

The U.S. and Britain have announced they will provide Ukraine with multiple rocket-launchers capable of striking targets up to 80 kilometers (50 miles) away. The systems are capable of firing longer range rockets that can hit areas of up to 300 kilometers (186 miles) away, but U.S. said it wouldn't supply the rockets. Russia-Ukraine War: UK To Send First Long-Range Missiles to Ukraine.

Asked how Moscow would respond if the U.S. and its allies change their mind and provide Ukraine with long-range rockets, Russian President Vladimir Putin said in televised comments Sunday that Moscow will “draw appropriate conclusions and use our strike means, which we have plenty of, in order to hit the facilities that we haven't struck yet.”

— In eastern Ukraine, keeping the lights on is a dangerous job

“We need weapons, we are talking about howitzers and missile systems — Soviet, old weapons that we can handle,” he said.

In the wake of Russia's stepped-up military efforts in eastern Ukraine, he added: “Imagine the firepower concentrated now against Ukraine in Donbas.”

On May 4, Bulgaria's Parliament approved military technical assistance to Ukraine, which provides only for the repair of Ukrainian weapons and equipment, not the provision of combat systems and small arms.

Parliament would need to revise its previous decision, which seems uncertain because of the divisions between the political parties on this issue.