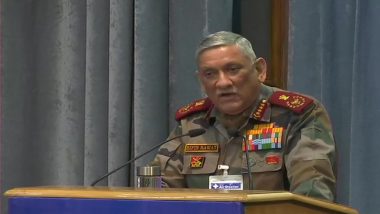 The Mi-17V5 helicopter of the Indian Air Force (IAF) carrying the 63-year-old tri-services chief crashed near Coonoor in Tamil Nadu on Wednesday, killing 13 of the 14 people on board including his wife and 11 other armed forces personnel. Also Read | Australia: Fertility Rate Drops to Record Low Amid COVID-19 Uncertainties.

In a tweet, President Rajapaksa said: “Deeply saddened to hear of the sudden demise of General #BipinRawat, Mrs Rawat & others in the tragic helicopter accident in Tamil Nadu. I extend my condolences to the families & to all Indians on behalf of the people of #SriLanka”. Also Read | Italian Competition Authority Fines Amazon USD 1.3 Billion for Abusing Its Market Position.

He said that Gen. Rawat, a long-standing true friend of the Armed Forces of Sri Lanka, in his former capacity as Chief of the Army Staff of the Indian Army, visited Sri Lanka in May 2018 for four days, inaugurated a Signal Laboratory of the Sri Lanka Army and explored new areas of cooperation between the two Armies.

“CDS & Commander of the @Sri_Lanka_Army General @SilvaShavendra and All Ranks of Tri Services Extend Heartfelt Condolences on Tragic Loss of Gen Bipin Rawat and few others in helicopter crash this noon (8) in India,” Sri Lanka Army said on Twitter.

The copter carrying Gen. Rawat and his entourage crashed in apparently foggy conditions, killing the 13 people on board, the IAF and other officials said. One person survived the crash and is being treated at a hospital. Gen. Rawat is survived by two daughters.