Amid a cascade of major crises in Ethiopia, Africa's second-most populous country, which left millions unable to vote, Ethiopian voters went to polls on Monday in a national election that has been held as a long-awaited emergence into a multi-party democracy. 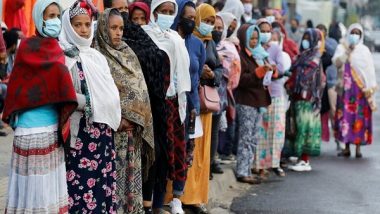 Addis Ababa [Ethiopia], June 22 (ANI): Amid a cascade of major crises in Ethiopia, Africa's second-most populous country, which left millions unable to vote, Ethiopian voters went to polls on Monday in a national election that has been held as a long-awaited emergence into a multi-party democracy.

According to Washington Post, foremost among the major crises is the disastrous seven-month-old civil war in the northern region of Tigray, where a powerful regional political party is waging a guerilla-style conflict against Ethiopia's military. The Ethiopian military has aligned with forces from neighboring Eritrea and Ethiopia's Amhara region.

All sides have been accused of war crimes, and humanitarian groups say hundreds of thousands in Tigray are experiencing famine conditions.

Meanwhile, the election was weakened by widespread insecurity, logistical issues and political disputes, while a fifth of polling stations in the rest of the country were not opened due to security concerns or improperly printed ballots, according to the country's election commission.

Ethiopian Prime Minister Abiy Ahmed came to power in 2018 on a wave of discontent against "a system of ethnic favouritism" accompanied by the authoritarian, Tigrayan-led regime that had ruled the country for decades.

Abiy's initial moves toward opening up political and media freedoms were widely lauded, and his peace overtures to Eritrea, which formally ended a long and brutal war, earned him a Nobel Peace Prize, reported Washington Post.

While Abiy is widely expected to be reelected, his standing both within and outside Ethiopia has been greatly diminished since the war in Tigray began. The US, which was once a close ally of the African country, has now imposed sanctions on top government officials for their alleged roles in serious human rights violations in Tigray.

Moreover, the European Union withdrew its election observers after failing to agree with the government on the mission's ability to move and communicate independently.

The continued detention of some of Ethiopia's most popular opposition leaders, particularly in Oromia, the country's biggest and most populous region, has eliminated Abiy's main challengers from the vote. The disjointedness of the polls also raises questions of disenfranchisement, Washington Post reported.

Meanwhile, fighting in Tigray continues as aid agencies report having unfettered access only to a handful of cities where the government has re-established control. Trips beyond those cities have resulted in numerous instances of aid workers being killed or assaulted, vehicles and their loads being confiscated, and an inability to reach those trapped behind rapidly shifting battle lines.

According to numerous investigations, dozens of ethnically driven attacks against civilians have been reported, including door-to-door executions and the systematic rape of Tigrayans by Eritrean troops.

Ethiopia's government has steadfastly asserted that all blame for the fighting and ensuing suffering of people in Tigray lays at the feet of the Tigray People's Liberation Front, which the government accuses of attacking a military command post in 2020.

Analysts said there is reason to worry that this election will further destabilize Ethiopia. Increasing levels of conflict around the country have already triggered a rollback of Abiy's initial reforms -- a trend that will likely be exacerbated by Ethiopia's increasing alienation from the international community, Washington Post reported Furthermore, many newly elected legislators may be seen as illegitimate by their constituents due to opposition boycotts, deepening existing tensions. (ANI)