Turkey Blackmails NATO, Being Only Country Benefiting From the Ukraine War

Turkey's Foreign Minister Mevlut Cavusoglu, acting on President Recep Tayyip Erdogan's orders, spoiled at least temporarily what would have been the biggest historic shift in European security in decades, by blocking last Wednesday the start of NATO membership talks with Finland and Sweden. 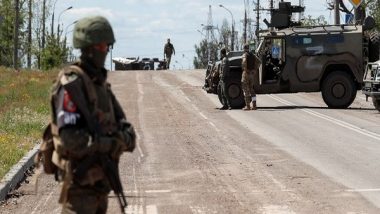 Nicosia, May 22: Turkey's Foreign Minister Mevlut Cavusoglu, acting on President Recep Tayyip Erdogan's orders, spoiled at least temporarily what would have been the biggest historic shift in European security in decades, by blocking last Wednesday the start of NATO membership talks with Finland and Sweden. Erdogan has dashed hopes for the quick inclusion of the two Nordic countries, which for many decades have been neutral, into the Alliance.

Turkey blocked the start of membership talks, putting forward the claim that the two Nordic countries, shelter PKK terrorists and supporters of the Gulen movement, which Ankara accuses of staging the coup attempt against Erdogan in 2016, as well as of having imposed arms export restrictions on Ankara. Turkish President Recep Tayyip Erdogan, Russian Vladimir Putin To Hold Next Round of Russia-Ukraine Negotiations in Turkey.

Although each of the 30 NATO member countries has a potential veto over who can join the Alliance, as all decisions in NATO are taken by consensus, exercising a veto at such a crucial time for the West will be an act of extreme brinkmanship on the part of Erdogan and could lead to Turkey's isolation.

US President Joe Biden on Thursday had a joint meeting at the White House with Finnish President Sauli Niisto and Swedish Prime Minister Magdalena Anderson.

Biden said that the two countries would strengthen NATO with their "strong democracies" rather than their military capabilities and declared that Finland and Sweden have the "full, total, complete backing" of the United States in their application to become members of NATO."

Biden added that even if Turkey is trying to block their membership, the US will stand by them against Russia. The US President strongly disagrees with Erdogan's actions in Syria and Turkish aggressive drilling in the Eastern Mediterranean, the bullying against Greece and Cyprus as well as the fact that Turkey has refused to apply the sanctions on Russia imposed by the West.

Replying to a question, Biden said he has no plans to discuss the issue of NATO membership with President Erdogan or to go to Turkey at the moment. It should be noted that Turkey is a quirky member of the Alliance, which many times quarrelled with other countries, particularly Greece and France, and several times refused to take part in joint exercises and even threatened to leave the Alliance.

A major point of friction between Ankara and NATO and the United States is the controversial purchase by Turkey in 2019 of the Russian S-400 mobile surface-to-air missile system, which is supposed to pose a risk to NATO and the F-35 program.

Reacting, the United States cut Turkey off from the F-35 aircraft development program, banned all US export licenses to Turkey's defence industries and imposed an asset freeze on Ismail Demir, the President of Turkey's Defense Industries, and other officers.

It should be noted that Erdogan's threat to block Sweden and Finland's membership of NATO, has allowed Russia's President Vladimir Putin to tone down the threatening statements he made when the intention of these two Nordic countries to join the Alliance was first announced.

So, although Russian Deputy Foreign Minister Sergei Ryabkov had described Finland and Sweden's joining NATO as a "grave mistake with far-reaching consequences", President Vladimir Putin later said that their bids to join NATO posed no direct threat to Russia.

As Turkey has the second-largest army in NATO, which thanks to its strategic position controls the entrance to the Black Sea, Erdogan decided that he could maintain Ankara's economic and other ties with Moscow and avoid imposing the sanctions on Russia decided by the West. He called the Russian invasion of Ukraine unacceptable but did not take any measure that would harm Moscow.

Furthermore, he offered to play the mediator between Moscow and Ukraine (to which it supplied its Bayraktar drones used against the Russian army) and hosted a meeting in Antalya which, however, did not produce any result.

The Turkish government did not close the country's airspace to Russian aircraft and last week it was announced that 450 charter flights between Russia and Turkey will be added every week.

Last year about 4.7 million Russian tourists took their holidays in Turkey, but this year the number will be smaller as ordinary Russians due to the sanctions have less money available to spend on holidays.

Turkey is one of the few countries that decided to accept the Russian credit card Mir in hotels and its use in ATMs, as well as the possibility of making payments in rubles and lira.

Furthermore, Turkey continued to be supplied Russian gas through the TurkStream pipeline, which also serves as an alternative route for Russian gas to Southern Europe, through the Black Sea.

It also offered a haven for the luxury yachts of Russian oligarchs which are moored in marinas along the south coast of Turkey and encouraged rich Russians to buy houses. The percentage of Russians buying property in Turkey rose from 9.7 per cent to 17.7 per cent last March. Russians buying property worth $400,000 can also get Turkish citizenship. So, Turkey is probably the only country that benefits economically from the war in Ukraine.

As Turkey's economy is passing through very hard times, with the Turkish currency losing about 54 per cent of its value against the dollar while inflation is soaring at 70 per cent, Erdogan must be thinking that he must exploit for Turkey's benefit all the opportunities presented by the isolation of Russia from all the other Western countries.

Facing a difficult election next year, the idiosyncratic Turkish President is trying to increase his popularity among the nationalists in Turkey and the Islamists, showing them that, by continuing to do business with Russia, he is a leader who dares to ignore the decisions of the Western countries.

Moreover, by blocking temporarily, at least, Sweden and Finland's membership of NATO, he may succeed in extracting some concessions on the issue of their support for PKK and make them lift their restrictions on arms exports to Turkey, which he can then present to the Turkish public as major successes.