With the new developments in the previous proposed plan, the central government has made green number plate mandatory for EVs across the country and asked the state transport department to ensure the same is being implemented. 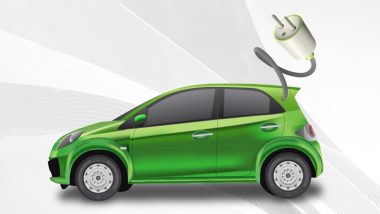 It was last year when the Indian government proposed a plan for introducing a special green-coloured registration plate for all electric vehicles in India. With the new developments in the proposed plan, the central government has made green number plate mandatory for EVs across the country and asked the state transport department to ensure the same is being implemented. As per the new policy, all the EVs need to use green number plates irrespective of the year they were purchased. Now Battery Operated Vehicles in India Must Display Registration Numbers on Green Licence Plates.

As per the new proposed plan, the new special registration plate reportedly will have to bear the vehicle number in white colour on the green background. This new mandate will provide a preferential treatment to the vehicles with no-carbon emissions such as parking, free entry into congested areas and concession on highway tolls.

The government has also introduced several incentives for EV users by announcing the second phase of FAME (Faster Adoption and Manufacturing of Hybrid & Electric Vehicles scheme) back in February 2019. This new scheme will also benefit EV makers via total budget of Rs 10,000 crore, which will be used in the form of subsidies to buyers and manufacturers in the country with at least 50% indigenous production.

The same allocated budget will also be employed for setting up EV infrastructure in the country, which also include charging stations. Moreover, the government is eying to provide support for 1 million e-bikes, 5 lakh e-rickshaws (3-wheelers) and 55,000 e-four wheelers. This initiative also extends to 7,000 e-buses. As a part of FAME-II scheme, the government will also be setting up around 7,200 charging stations across India.

(The above story first appeared on LatestLY on May 06, 2019 12:47 PM IST. For more news and updates on politics, world, sports, entertainment and lifestyle, log on to our website latestly.com).