Established in 1987, the Edison Awards™ have recognized and honored some of the most innovative products, services, and business leaders from around the world and is among the most prestigious accolades honoring excellence in new product and service development, marketing, design, and innovation. 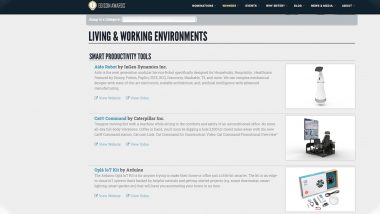 Established in 1987, the Edison Awards™ have recognized and honored some of the most innovative products, services, and business leaders from around the world and is among the most prestigious accolades honoring excellence in new product and service development, marketing, design, and innovation.

InGen Dynamic's Aido Robot based on The Origami Platform™ was chosen as a finalist for the 2021 Edison Awards in the highly competitive category of Living and Working Environments. Gold, Silver & Bronze Awards will be announced in late April at an awards ceremony in Fort Myers, Florida, where Thomas Edison had a family home and laboratory.

The yearly honors personify the persistence and excellence of the awards’ namesake, prolific innovator Thomas Edison. Finalists for the honors are deemed “best of the best” by the world’s top senior business leaders, academics and innovators. InGen Dynamics  secured one of the top three finalist positions in the world-wide competition, not long after being reported by Bloomberg and BusinessInsider about their $100 Million valuation.

The company and products have been recognized by major associations including IEEE, Disney, Boston Consulting Group, and Robo-Business and featured in major global research reports on security and home robotics. InGen and its products have also featured in Fortune, Forbes, PopSci, IEEE, BCG, Discovery, and Mashable.

Led by Arshad Hisham, Founder and CEO, InGen Dynamics is the creator of Aido Home Robot built on The Origami Platform™. Arshad is a serial entrepreneur, engineer, inventor, and the chief designer. He is also a frequent speaker on the Robotics most recently as a keynote speaker at the annual IEEE Robotics Symposium (Columbia University), Boston Consulting Group's annual AI (Chicago) machine learning event, City of Tomorrow Summit ( New York ) as well as at the industry leading Robo-Business ( San Jose) event among others.

“We proudly view our finalist status for this Edison Award as a reflection that with The Origami Platform™, we’re at the forefront of technical and physical innovations at a time when the world most needs it,” said Arshad Hisham, Founder and CEO. “Being nominated for an Edison Award is quite an honor, but to be named a finalist, along with the other amazing companies on the list, is an incredibly humbling experience,” Arshad said. “I’m so thankful for this opportunity, and for the entire inGen team that has worked so hard to get us to the place where this recognition is possible.”

By connecting with more than 7,000 companies from around the world during each nomination season, the Edison Awards are on the cutting edge of identifying emerging trends and market developments. The 2021 Edison Award winners will be announced in April.

Each year, less than 150 companies from all over the world are honored with an Edison Award, ranging from small start-ups to Fortune 500 companies. General Electric, IBM, Cisco and Lockheed Martin Corp. are just a few of the notable past Edison Award winners. In addition, one or more individuals is presented with the Edison Achievement Award each year for their significant and lasting contribution to the world of innovation through their career, leadership and achievements. Elon Musk of Tesla Motors & SpaceX, Steve Jobs of Apple, Ted Turner of Time Warner, and Martha Stewart of MSL Omnimedia are a few of the past honorees.

“In a year when everyone was forced to change their daily routines, it’s amazing how many companies responded by innovating new solutions that make consumers’ lives safer, healthier and more productive,” Edison Universe Executive Director Frank Bonafilia said.