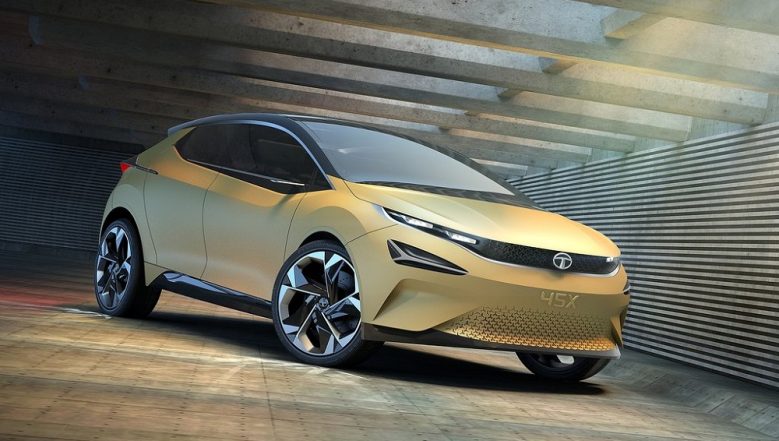 Tata Motors, a home-grown automaker has officially revealed the production name of its upcoming premium urban car - 45X concept. Christened as Altroz, the premium hatchback will make its global premier at the Geneva Motors Show 2019 that is slated to commence from March 5. The next generation premium car takes its inspiration from the bird 'Albatross'. The company will be launching the new premium hatchback by mid of this year. The car was showcased at Auto Expo 2018 in the form of 45X concept. Tata 45X Premium Hatchback Name Reveal Teaser Out; To Be Christened as Aquila.

As the urban car will be a premium model, the company aims to woo the customers by offering class leading features, equipment, best-in-class performance and cabin space. Also, the hatchback has been spotted testing on Indian roads in the past.

Mr. Mayank Pareek - President, Passenger Vehicle Business Unit, Tata Motors said – “We are extremely elated to announce the name of our upcoming model, which will redefine the premium hatchback segment for the industry. With superlative design elements and a versatile architecture, the Tata ALTROZ is the perfect amalgamation of futuristic design, advanced technology, class leading connectivity, thrilling performance and smart packaging. We are excited to introduce this product to our customers and are gearing up for its commercial launch in mid - 2019. With Turnaround 2.0 now in full swing, we aim to continue winning sustainably in the PV segment through such timely product interventions”.

The new Tata Altroz premium urban car will be the first vehicle to be based Tata's new ALFA (Agile Light Flexible Advanced) architecture. Offering characteristics like lightweight, modular and flexible, the new Tata Altroz will carry the IMPACT 2.0 design language. Coming to the powertrain option, the new Tata Altroz is expected to be offered in both petrol and diesel engine. However, there is no official confirmation yet.

Going by the market reports, the new Tata Altroz premium urban car could be offered with a 1.2-litre and 1.5-litre turbocharged engines. The 1.2-litre, 3-cylinder, turbocharged unit will be lifted from Tiago whereas the 1.5-litre, 4-cylinder turbocharged unit could be borrowed from Tiago. The transmission duties on the new Tata Altroz will be carried out by manual gearbox initially. When launched, the new Altroz will take on Maruti Baleno, Honda Jazz, Hyundai i20, Volkswagen Polo.