Mechanically, the Volkswagen T-ROC SUV will come powered by a 1.5-litre turbocharged 4-cylinder petrol engine. The unit is tuned to make 147hp and 240Nm of power figures. The engine will be mated to a 7-speed DSG automatic transmission with paddle shift. 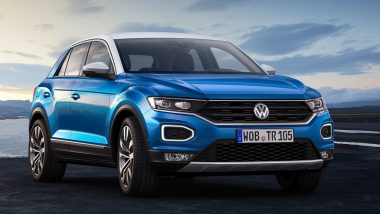 Volkswagen India will be launching the new T-ROC SUV tomorrow in India. Unveiled in India at 2020 Auto Expo, the upcoming T-ROC SUV will be VW's second model in India after Tiguan All-Space. The carmaker is already taking bookings for the SUV across its dealerships in India. Likely to be priced between Rs 18 lakh to Rs 20 lakh (ex-showroom), the SUV will be taking on the rivals such as Tata Harrier, MG Hector, Hyundai Tucson and Jeep Compass. 2020 Hyundai Creta SUV Launched in India at Rs 9.99 Lakh; Prices, Features & Specifications. The VW T-ROC SUV will be fully imported model, which is expected to get an expensive price tag. Moreover, the company is also migrating towards all-petrol model lineup for the Indian market as we approach towards BS6 transition. So, we can expect T-ROC SUV to be offered with a single petrol engine.

Volkswagen's new SUV will be loaded with a signature-style vertical grille with trapezoidal LED headlights featuring LeD DRLs. The SUV will also be equipped with a panoramic sunroof, 6-airbags, ABS with EBD, ESC, all-round disc-brakes and a digital MID screen with analogue dials in the instrument cluster.

Dimensionally, the VW T-ROC will be identical to the international model, which measures 4229mm in length, 1831mm in width and 1572mm in height. The Wheelbase of VW T-ROC will stand at 2595mm.

Mechanically, the SUV will come powered by a 1.5-litre turbocharged 4-cylinder petrol engine. The unit is tuned to make 147hp and 240Nm of power figures. The engine will be mated to a 7-speed DSG automatic transmission with paddle shift. As far as T-ROC is concerned, the German carmaker will not be expecting large volumes as to the fact it will be brought into India as CBU impacting the price.

(The above story first appeared on LatestLY on Mar 17, 2020 10:53 PM IST. For more news and updates on politics, world, sports, entertainment and lifestyle, log on to our website latestly.com).