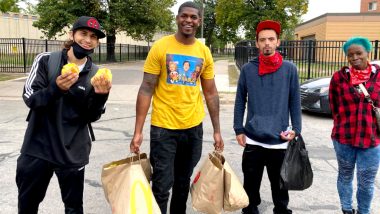 Khalil Griffith (Born May 30, 1997) Better know as KGTV Vlogs, is an American YouTuber, Internet personality, model, and musician. As well as posting on his own YouTube channel and Instagram, he has ran since June 2019, which currently has over 145k total followers combined.

https://www.youtube.com/channel/UCc-ncbEY81I6DlTe7OKbHqQ KGTV Vlogs In 2020 started a giveaway series on his channel that has impact his community in a positive way. “Feeding The Homeless” title of his Youtube videos series, has struck his city during there devastating time. Due to the increase police violence, recent killing of George Floyd and ongoing COVID-19 cases. KGTV Vlogs is a community advocate, leader and influencer to the youth and community. Who has recently been giving away food to his community, along with Keith so much and also Kebang. Who have been impacting lives in a positive way and bring the community together as one.

KGTV Vlogs I want to change my city for the better. I look around at other influencers and Internet personality star on the same platform as me not even acknowledge, what’s going on in today’s society. It’s sad to see so many people homeless in my city Minneapolis Minnesota, I’ve been here over 13 years. For the last two years I have positioned myself to being a leader and changing things that’s going on in my city today. I don’t wanna be known as a Youtuber for skates, pranks, and challenges. I wanna be known as a goat, but I leave that to the people.