Economic Survey 2022 Highlights: GDP Growth Projected at 8-8.5% For FY 2022-23; Here Are The Key Takeaways From The Report Card Tabled by Nirmala Sitharaman Ahead of Union Budget

The Economic Survey has been presented in the budget session of the Parliament which started today by Finance Minister Nirmala Sitharaman. Economic survey is an account of the health of the country's economy. 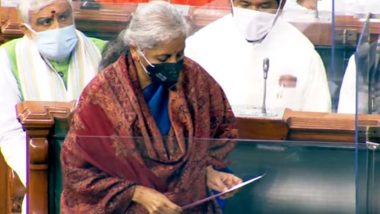 The Economic Survey has been presented in the budget session of the Parliament which started today by Finance Minister Nirmala Sitharaman. Economic survey is an account of the health of the country's economy.

The Economic Survey gives details of the state of the economy ahead of the government's budget for the financial year 2022-23. during the financial year 2022-23 which is April 2022 to March 2023, the Indian economy has been estimated to grow at the rate of 8 to 8.5 percent as it fights a spike in Covid-19 cases and rising inflationary pressure. At the same time, the National Statistical Office (NSO) has estimated that the economic growth rate can be 9.2 percent.  Budget Session 2022 Live Streaming: Watch Live Updates From Parliament as Budget Session Begins Today

According to the Survey, agriculture sector has  been the least impacted by the pandemic and the sector is expected to grow by 3.9 per cent in 2021-22 after growing 3.6 per cent last year.

Surpassing pre-pandemic levels, government consumption is estimated to grow by a strong 7.6%.

The hardest hit by the pandemic is the services sector, especially segments that involve human contact. This sector is estimated to grow by 8.2 per cent this financial year following last year's 8.4 per cent contraction.

As per the survey the current financial year has been great for the Indian primary market with a boom in fundraising through IPOs by many new-age companies.

The banking system is well capitalized and the overhang of NPAs seems to have structurally declined allowing for some lagged impact of the pandemic.

Though exports of both goods and services have been strong so far in the previous financial year, imports also recovered strongly with recovery in domestic demand as well as higher international commodity prices.

India's GDP growth for the financial year (FY22) is pegged at 9.2 per cent. The pre-budget document estimates that during the period, the agriculture sector grew by 3.9 per cent, industries at 11.8 per cent and the services sector by 8.2 per cent. Till last year, the Economic Survey used to have two parts, the first part being policy reform ideas. But from this year only one-part survey has been prepared by the Chief Economic Adviser (CEA). The tenure of CEA KV Subramaniam ended in December.  Union Budget: Here is All You Need to Know About India's Budget Session's Journey

According to the survey, the inflation rate has been expected to remain in control. The survey said that the economy is being supported by large-scale vaccination, improved supply, easing of regulations, strong growth in exports and fiscal space to increase spending. Though all estimates will depend on the fact that covid doesn’t hamper the economy further.

(The above story first appeared on LatestLY on Jan 31, 2022 02:35 PM IST. For more news and updates on politics, world, sports, entertainment and lifestyle, log on to our website latestly.com).