"Avengers: Infinity War" has broken opening weekend records, with $630 million in global collections, even though it's yet to open in China. 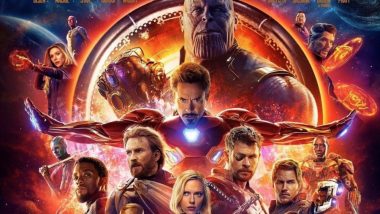 Avengers: Infinity War has broken opening weekend records, by hauling in $250 million in U.S. domestic receipts by opening in 4,474 screens, surpassing "Star Wars: The Force Awakens" for the highest opening weekend of all-time.

"Infinity War" also set a new global opening record with $630 million, even though it's yet to open in China, the world's second-largest movie market. It opens there May 11. "The Fate of the Furious" previously held the worldwide opening mark with $541.9 million.

The money raked in by Marvel’s latest offering directed by the Russo brothers, seems to match the star value of Avengers: Infinity War as it is the biggest amassing of superheroes ever, on the big screen.

In India ($18.6 million), it was the biggest bow for a Western title ever and has already surpassed the entire runs of The Avengers, Avengers: Age of Ultron and Captain America: Civil War. It also has already topped the first Avengers and Ultron in the Philippines. Among other notable accomplishments, Infinity War was the No. 2 debut of all time in Australia ($23 million), behind Force Awakens.

Infinity War notched the best start for a superhero flick in France ($17.7 million), Germany ($14.7 million) and Spain ($8.3), while it was the second-best superhero showing in Italy ($11 million). Leading all foreign markets with $42.2 million was the U.K./Ireland, where Infinity War now boasts the third-biggest launch of all time, including the biggest Saturday ever.

Infinity War, cost between $300m and $400m to make and has top Hollywood stars including Robert Downey Jr, Scarlett Johansson, Benedict Cumberbatch, Chadwick Boseman, Mark Ruffalo, Chris Hemsworth and Chris Pratt, star in the film, the first of two parts. The film tracks the Marvel superheroes in their battle against super-villain Thanos as he destroys entire worlds in his quest for infinity stones.

The conclusion is set to be released in May 2019.

(The above story first appeared on LatestLY on Apr 30, 2018 05:56 AM IST. For more news and updates on politics, world, sports, entertainment and lifestyle, log on to our website latestly.com).