Bigg Boss 14: Gauahar Khan Comes Out in Support of Jaan Kumar Sanu Over the Nepotism Debate on the Reality Show (View Tweet) 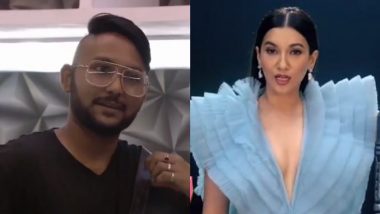 After the seniors Hina Khan, Gauahar Khan and Sidharth Shukla left Bigg Boss 14 house, we are now seeing the real side of the contestants. Also, from the past week, a lot has been spoken inside the ghar which has created a storm online. One of the topics from the same is the nepotism comment made buy Rahul Vaidya while nominating Jaan Kumar Sanu. This indecent comment by the Indian Idol contestant got Twitter divided. Now, amid the chaos, Gauahar Khan who is an avid follower of the show has tweeted in favour of Jaan. She mentioned how nepotism is the easiest topic to talk about. Bigg Boss 14: Jaan Kumar Sanu Apologises on National TV for His Insensitive Remark on Marathi Language (Watch Video).

The Bigg Boss 7 winner without mincing words took to the micro-blogging site and dropped a message for Jaan on how he should be proud to have a legendary father and also prouder about the fact that he has made it to the reality show based on his own personality. We totally agree with the actress, as these days gaining attention by just using the word nepotism is very much popular. Kudos to Khan for always standing for the right. Bigg Boss 14: Pavitra Punia Hurls Abuses At Senior Gauahar Khan, Latter Shuts Her Down With A Sassy Reply (View Tweet).

Nepotism is the easiest topic to rake up some self attention these days ! #JaanKumarSanu be proud of the legend u have as a father , n prouder of the fact that u r on the show as Jaan kumar sanu ! You are You ! Don’t worry be happy ! 🤗

During nominations, Rahu Vaidya had picked Jaan's name and said, "I hate nepotism. All the contestants are here because of their own hard work, Jaan is here because he is someone’s son. He doesn’t have any personality of his own." To which Jaan had replied to him by saying that he is fortunate to have Kumar Sanu as this father. Stay tuned!

(The above story first appeared on LatestLY on Oct 29, 2020 11:54 AM IST. For more news and updates on politics, world, sports, entertainment and lifestyle, log on to our website latestly.com).