So when we spotted Sidharth Shukla and Rashmi Desai displaying this gesture, loaded with 'nautanki', we raised our collective eyebrows with much curiosity. There we go! Are they friends again? Are they foes? Or are the two being their usual 'drama (queen)' self? 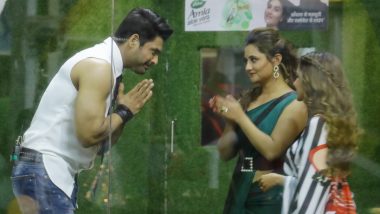 It is hard to decode both Sidharth Shukla and Rashmi Desai (Both the personas and the personality, the real and the reel ones, indeed). What is even harder to crack is the equation the two share.  The ex-flames are friendly to each other on some sunny days, and on some odd days the two come across as each other's arch enemies. So when we spotted these two frenemies doing this gesture loaded with nautanki, we raised our collective eyebrows with much curiosity. There we go! Are they friends again? Are they foes? Or are the two being their usual 'drama (queen)' self?

All these queries, and much more, will be addressed in tonight's weekend ka vaar episode. While these two are seen in the picture greeting each other cordially,y but we know what goes underneath the facade is much more complex! We have seen their love-hate relationship in the previous season of Bigg Boss where the two would throw bouquets and brickbats at each other in equal measures. What new Sidharth and Rashmi are going to offer in tonight's episode then? You have to wait and definitely watch the show to see how the drama unfolds! 'Bigg Boss 13': Why Rashmi Desai Divorced Nandish Sandhu

A little birdie who is keeping a close watch on what's going on inside the glass-walled house of Bigg Boss chirps to us "The excitement continues as Rashami Desai and Tina Dutta who have been part the superhit show Uttaran, enter the house to celebrate 12 years of the show. The two also have some tough questions for the housemates. They ask each housemate about who they feel does not have any standing of their own and are using the other housemates to get ahead in the game. The housemates’ answers are very interesting and give a clear picture about how the game is being played in the house."Throwback: Bigg Boss 13 Host Salman Khan and Rashami Desai's Chemistry in This 8-Years Old AD Is so Cute (Watch Video)

We also gather that things are going to be fast, furious and the frenzy is going to go up in the house. Sidharth will come up with some very exciting feedback and questions from Bigg Boss fans who have been keenly observing the contestants the entire season. Rahul will be asked about why he always questions Abhinav’s abilities when he himself has not shown any winning qualities yet. Rahul is also asked about his friendship with Aly is fine but when anyone becomes Rubina’s friend, he refers to them as her chamchas!

(The above story first appeared on LatestLY on Jan 24, 2021 04:43 PM IST. For more news and updates on politics, world, sports, entertainment and lifestyle, log on to our website latestly.com).