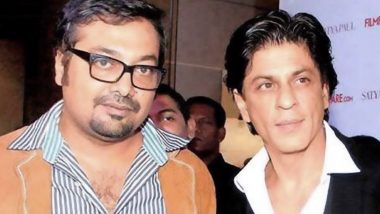 The cinematic sensibilities of Anurag Kashyap and Shah Rukh Khan are quite stark. Khan is an aspirational superstar, everyone wants to be him, act with him, direct him. He has over the year become this larger than life romantic hero for many. Kashyap is close to what we have as our own Martin Scorcese and Quentin Tarantino. His movies are dark, real, and grungy as he believes in representing life as it is. And despite all that, these two have a connection. Anurag is SRK's junior from Hansraj College. In a recent interview with Mid-Day, he recalled a time when he just walked into Mannat because he was hungry and SRK did cook something for him. Anurag Kashyap Apologizes To Natarajan Subramiam In a Series Of Tweets

Anurag said, "I was hungry and I walked into his house, using our college connection [both went to Hansraj in Delhi]. I remember him feeding me. He only knew how to make an omelette." These two have been in touch and Kashyap had once declared during an old interview that he wouldn't leave this industry before making a film with him.

Anurag did go to SRK with No Smoking and the actor was kicked about it too but then he went away. That's exactly what the director said. Speaking to the media, he had revealed once, "Shah Rukh Khan wanted to do No Smoking, he was very upset when I went away from him. I also went to him with Allwyn Kalicharan. I wanted to do that with him and a big superstar from Hollywood. Everything was almost done but then again (it didn’t happen)."

Although the director always looked up to SRK, he wanted to design his own career despite the superstar giving him ample advice. "He is my senior from university, he has been there like a big brother helping me. Shah Rukh is super successful. When he loves you, he approaches things like, in my struggling years, (he used to tell me), ‘If you do what I tell you to do, your problems will disappear’. But I didn’t want him to make my life, I love him to death," Kashyap had said in an old interview.

(The above story first appeared on LatestLY on Jun 12, 2020 04:59 PM IST. For more news and updates on politics, world, sports, entertainment and lifestyle, log on to our website latestly.com).