After Sonu Sood, Amitabh Bachchan Arranges Buses for UP Migrant Labourers Amid Lockdown

Moved by the plight of stranded migrants, Bollywood veteran Amitabh Bachchan has come forward to contribute his mite to their cause. After the Friday afternoon ‘namaz', a fleet of 10 buses carrying around 225 excited migrants. 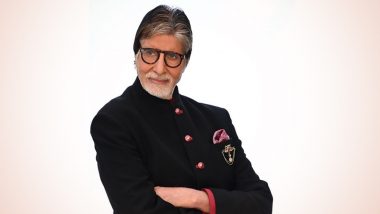 Moved by the plight of stranded migrants, Bollywood veteran Amitabh Bachchan has come forward to contribute his mite to their cause. After the Friday afternoon ‘namaz', a fleet of 10 buses carrying around 225 excited migrants, including women and 43 children, were flagged off for various destinations in Uttar Pradesh. As green flag was shown to the Bachchan-sponsored initiative, the weary but cheerful migrants let out collective cheers of joy and relief, with ‘thumbs up' or ‘V' signs, looking forward to their long journey home. Sonu Sood Reveals the Cost of One Bus to Send Migrants Home, Says It’s Somewhere Between Rs 1.8 to 2 Lakh.

Five of the buses are on way to Prayagraj, two buses each are headed for Gorakhpur and Bhadoi, while one bus will arrive at Lucknow. The migrants will then have to proceed to their respective villages from these towns. The flag-off was attended by ABCL Managing Director Rajesh Yadav, Suhail Khandwani, Managing Trustee of the Mahim Dargah Trust and Trustee of Haji Ali Dargah Trust, officials and top representatives of both the trusts including Mohammed Ahmed. Sonu Sood Initiates Airlifting of 177 Girls Stuck In Kerala, Helps Them Reach Their Homes in Bhubaneswar.

"It was the brainchild of Bachchan sahab, who has been deeply concerned by the sufferings of the migrants since the lockdown. He made a proposal and the Haji Ali Dargah and Mahim Dargah responded by offering to make all the arrangements," Sabir Sayed, Mahim Dargah's IT-Director told IANS.

The Haji Ali Dargah, incidentally, has an emotional connect with Bachchan and his fans. He had shot the climax of his 1983 superhit "Coolie" at the historic shrine. The Manmohan Desai entertainer is still recalled for the grievous accident that the superstar suffered on the film's set, following which he was hospitalised for months. While on his current initiative, Bachchan had been feeding hundreds of migrants at various locations and also providing them with medicines over two weeks, without much fanfare.

They were also given footwear, as many migrants were developing sores or blisters or gashes on their legs due to long hours of walking in the scorching sun. Bachchan, through Yadav, and the trustees of the two mausoleums, got down to the nitty-gritties of organising the massive operation over the past two weeks. "It was tough work. Finally, after securing all permissions, clearances from the Maharashtra and other state governments, the fleet of buses finally started on their trips today, well before the onset of monsoon," said Sayed.

Mahim Dargah Trustee (Dr) Mudassar Lambe informed IANS that a thorough medical screening of each migrant passenger was carried out, taking into account various criteria. "Besides, to ensure a hassle-free journey, each passenger has been given a full kit of masks, sanitisers, gloves, water bottles and food packets for the entire journey. Each bus has a full-fledged emergency medical kit with essential medicines, fruit juices, glucose, etc," Lambe added.

Owing to the social distancing norms, the 52-seater buses will accommodate around 25 passengers, and the bigger buses will seat 30 travellers. The migrants hailing from all religions prayed at the Haji Ali Dargah, and later the bus halted briefly at the Mahim Dargah before zooming off to their respective destinations, said M. Imran (Ibrahim) Khan, the Covid-19 reliefs executive for the Haji Ali Dargah.

Bachchan's is the second major effort by a Bollywood personality after actor Sono Sood, who organised several buses for migrants over the past days and an AirAsia flight from Kochi to Bhubaneshwar with 167 migrants today. Besides this, the National Law School, Bengaluru alumni along with an IIT team sent 175 migrants by an AirAsia flight from Mumbai to Ranchi, Jharkhand, on May 27. Alongside the Maharashtra government, scores of other individuals, NGOs and organisations are also engaged daily in the huge humanitarian efforts to ensure the safe repatriation of hundreds of migrants to the safety of their homes.