While it's indeed a piece of good news that Sooryavanshi is finally coming to theatres near you, the latest we hear is that Akshay Kumar's Bell Bottom release date is in danger, and the reason is Sooryanvanshi. Check out the full story. 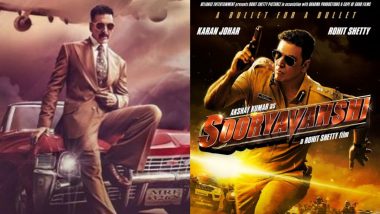 When Akshay Kumar and the team announced that Sooryavanshi is all set to release on April 30, 2021, fans of the superstar breathed a sigh of relief. Why you may ask? As this Rohit Shetty film was supposed to release two years back but was getting delayed due to unfortunate reasons. While this is indeed a piece of good news that Sooryavanshi is finally coming to theatres near you, the latest we hear is that Akki's Bell Bottom's release date is in danger, and the reason is Sooryanvanshi. Sooryavanshi Release Date: Akshay Kumar, Katrina Kaif’s Action Drama Is Coming Your Way on April 30.

According to a report in Bollywood Life, Akshay and producer of the Bell Bottom Jackky Bhagnani are now unsure on whether it is right to release BB in less than a month after Sooryavanshi or postpone it and find a new release date.

"Akshay probably convincing Jackky Bhagnani to go for the latter option as even a superstar as himself, who's accustomed to three, sometimes four releases in a year, wouldn't want another film of his arriving so quickly on the heels of a previous one. It also seems that Rohit Shetty decided on Sooryavanshi's release date all on his own," a well-respected source hinted to the portal. Bell Bottom: Akshay Kumar, Vaani Kapoor Starrer To Release on May 28.

"Akshay Kumar feels that the audience wouldn't be too keen on buying tickets for another of his releases during the time of summer vacations when families plan their outings well in advance," the source added. However, there has been no official confirmation about this, neither by the makers nor the actor. Bell Bottom is supposed to release in theatres on May 28 and stars Vaani Kapoor as the female lead. Stay tuned!

(The above story first appeared on LatestLY on Mar 16, 2021 01:54 PM IST. For more news and updates on politics, world, sports, entertainment and lifestyle, log on to our website latestly.com).