Talking about the picture, we see Amitabh Bachchan and Aaradhya posing cheekily for the camera. Aardhaya had headphones around her head while Amitabh poses with the victory sign. 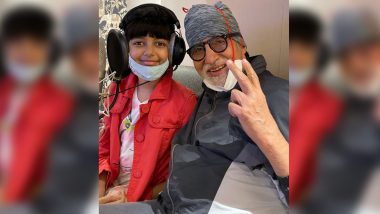 Amitabh Bachchan is always excited to be at work. He is one of the most hard-working actors in Bollywood and he often gives his fans a glimpse of him spending his time on different sets. The actor is ending the year with a day busy with work but this time around his partner is not an actor but his own granddaughter. Amitabh recorded a song with Abhishek Bachchan and Aishwarya Rai Bachchan's daughter Aaradhya Bachchan. The actor took to social media to share an adorable picture with the little star. Amitabh Bachchan Tweets a ‘Folded Hands’ Emoji for Unknown Reasons and Gets Brutally Trolled for His Silence Over JNU Violence.

Talking about the picture, we see Amitabh Bachchan and Aaradhya posing cheekily for the camera. Aardhaya had headphones around her head while Amitabh poses with the victory sign for the picture. Seeing Amitabh's expression we think the duo's recording session went quite well and Amitabh enjoyed spending time with his granddaughter. Amitabh enjoyed his fans that two sat down for a recording session and created some great music.

Fans were elated to see this happy picture and showered love for the grandfather-granddaughter jodi. The picture grabbed many eyeballs and garnered 8 million hours in just a few hours of it being uploaded by the actor. One user wrote, "It's gonna be a lifetime memory for her sir." The fans are excited to see what music the two have created. Amitabh Bachchan Visits Sye Raa Narasimha Reddy Sets to Meet Ram Charan-View Pic.

Workwise, Amitabh Bachchan was last seen in Shoojit Sircar's Gulabo Sitabo alongside Ayushmann Khurrana. During the lockdown as well, Big B was busy with work when he contracted COVID-19 virus in August. He is currently busy with his famous TV quiz show Kaun Banega Crorepati 12. He also has Bhrahmastra in his kitty alongside other projects including Chehre starring Emraan Hashmi. The actor will be seen alongside Ranbir Kapoor and Alia Bhatt in Ayan Mukerji's trilogy.

(The above story first appeared on LatestLY on Dec 31, 2020 12:43 PM IST. For more news and updates on politics, world, sports, entertainment and lifestyle, log on to our website latestly.com).