Anushka Sharma Says She Knows the Perfect Spots for Sunkissed Pictures in Her House As She Gorgeously Glows in the Latest Snap! 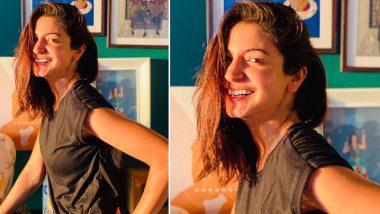 Coronavirus lockdown in India has now reached its fifth phase and while certain portions of the country are now getting some relaxations, social distancing is still a necessity and it may take a while before activities such as film shoots begin. Bollywood actors have been quarantined at home for over three months now and in this time, many have managed to pick up some new skills. Anushka Sharma who has been on cloud nine with the success of her recent production, Paataal Lok, recently took to Instagram to share a gorgeous picture of herself. With the picture, she also revealed one skill she's picked up while she's been at home. Anushka Sharma and Virat Kohli Are the Cutest 'Chhole Bhature' Loving 'Hamesha Ke Liye' Couple in Their New Commercial Together.

Anushka took to Instagram to share a brilliant picture of herself, glowing in the perfect sunrays. The actress' sunkissed snap is sure to make you fall for her beauty. Sharing the snap, Anushka revealed one thing she's learnt being at home and no we are not talking about any kitchen skills. The actress stated how she's now found all the best spots to click perfect sunkissed pictures. She wrote, "By now I know all the sunlight spots of every inch of my home." While fans of the actress loved how gorgeous she looks in this pic, actress Aditi Rao Hydari agreed to Anushka's point of finding perfect spots at home and wrote, "Hahahahha... same!!!!"Anushka Sharma Shares Funny Video Of ‘Dinosaur’ Virat Kohli and Ranveer Singh Can’t Control His Laughter!

Anushka and Virat have been quarantined at their Mumbai home and it has been a delight to see their lockdown posts. From Anushka chopping off Virat's hair to the Indian skipper pretending to be a dinosaur, we've seen it all. If this was any less fun, the duo were also spotted enjoying a game of cricket together. This new snap of Sharma is just another delight!

(The above story first appeared on LatestLY on Jun 02, 2020 12:40 PM IST. For more news and updates on politics, world, sports, entertainment and lifestyle, log on to our website latestly.com).