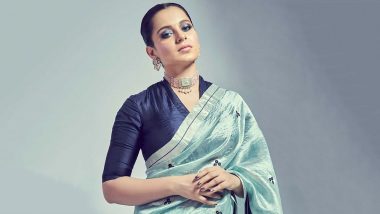 Kangana Ranaut is yet again ready to be a director. The actress is reuniting with the writer of Manikarnika: The Queen Of Jhansi, KV Vijayendra Prasad, for her next venture. This movie is based on the journey of Ayodhya's Ram Mandir case and the narration of it from the past 600 years. The actress' team on social media also shared the snaps of the Ayodhya Ram Mandira's Bhoomi Pujan that took place on Wednesday. Now, the star has decided to helm this project that focuses on the case with 'Aparajita Ayodhya.' Ram Mandir Bhumi Pujan in Ayodhya: Ramayan’s Sunil Lahri aka Laxman Reacts to the Historic Moment, Says Lord Ram’s Exile Has Finally Come to an End.

In her recent media interaction, she said, "It's a story of devotion, faith and above all, unity in the country. Ram Rajya is beyond a religion and that's what Aparajita Ayodhya will be about. It's a very tough screenplay as it travels across 600 years and the Ram Mandir bhumi pujan will very much be a part of my film. Vijayendra sir has put it together in a beautiful way."

The curly-haired actress also further added that she thought that the day of Bhumi pujan would be perfect to unveil the film's logo. However, she looks forward to start the shoot as soon as possible. She added, "we have high hopes that we will be able to go on floors very soon. I can't wait to narrate the film to my actors." It has to be seen who does she cast in her film.

(The above story first appeared on LatestLY on Aug 05, 2020 09:36 PM IST. For more news and updates on politics, world, sports, entertainment and lifestyle, log on to our website latestly.com).