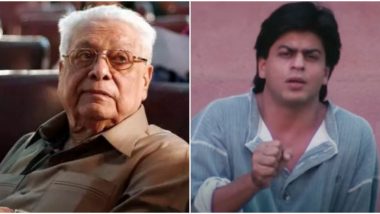 As if 2020 wasn't a bad year already, we are still getting more and more bad news as the days go by. If you are a fan of Hindi cinema, we have already bear the sad demises of Irrfan Khan, Rishi Kapoor, Wajid Khan and now, we are also grieving the passing away of the great Basu Chatterjee. He was 90. The Bengali filmmaker has given us some very lovely gems in the '70s and '80s that we still love to watch. Along with Hrishikesh Mukherjee and Sai Paranjpye, Basu brought the spotlight on Indian middle-class in cinema. Basu Chatterjee Passes Away; 10 Movies Of The Legendary Director That Will Make You Feel The Loss Dearly.

He had made classics like Rajnigandha, Chitchor, Chhoti Si Baat, Swami, Khatta Meetha, Manzil, Baton Baton Mein, Apne Paraye, Shaukeen, Chameli Ki Shaadi and Kamla Ki Maut. After Kamla Ki Maut, that came out in 1989 and also starred the late Irrfan Khan, Basu Chatterjee wasn't as prolific in Bollywood, as he was in the previous two decades.

One notable Hindi film of the director that came in the '90s was Gudgudee. A comedy, the movie was produced by Mahesh Bhatt, and starred Anupam Kher, Pratibha and Jugal Hansraj. It was about a middle-aged man going through a mid-life crisis who gets fascinated with his hot, young neighbour and spins a web of lies to carry and affair with her. The song "Har Pal Chahe Mera Dil" was very popular then. Basu Chatterjee Passes Away: West Bengal CM Mamata Banerjee Offers Condolences, Says ‘He Gave Us Gems Like Chhoti Si Baat, Chitchor’ (View Post).

A fascinating aspect of the film was the cameo appearance of Shah Rukh Khan in his post-DDLJ and pre-Kuch Kuch Hota Hai phase. The superstar played himself and acts as a narrator for the movie, explaining how the city of Mumbai acts like a magnet and attracts people with dreams like him. Shah Rukh Khan's Meer Foundation Will Support the Boy Whose Heart-Wrenching Video of Trying To Wake his Dead Mother, Went Viral.

Check out the scene below:

After the failure of Gudgudee, Basu Chatterjee shifted his focus to Bengali cinema, directing five films for the industry. He made two more Hindi films in the interim - Prateeksha and Kuch Khatta Kuch Meetha, both releasing in 2007. Chatterjee's last film was Trishanku in 2011. We will sure miss this legendary director and thank him from our heart for some of the cinematic gems that he gave us.

(The above story first appeared on LatestLY on Jun 04, 2020 05:22 PM IST. For more news and updates on politics, world, sports, entertainment and lifestyle, log on to our website latestly.com).