Bigg Boss contestant Manu Punjabi took to Twitter to reveal that he also received the same death threat as Sidhu Moose Wala. He also went on to thank the Jaipur police for arresting the person responsible for the threat. 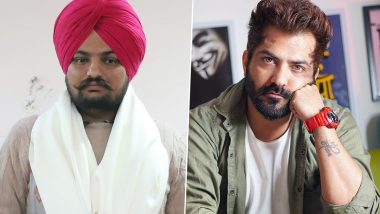 Former Bigg Boss 10 contestant Manu Punjabi has shared a post on Twitter revealing about being threatened to be killed like Punjabi rapper Sidhu Moose Wala. Manu has thanked the Jaipur police for arresting a man who tried to extort money from him. As per the reports he was told to pay up or else he would be shot dead like Sidhu Moose Wala. Sidhu Moose Wala's SYL Song That Clocked 27 Million in Two Days Is No Longer Available on YouTube.

The Bigg Boss 10 and Bigg Boss 14 contestant took to his Twitter account to thank the cops. He tweeted, "I feel blessed and thankful to @Tomarhricha Add SP RamSingh ji Comm Anand shrivastav Ji @jaipur_police to provide me security and find out the culprit. I got email, claiming to be from gang of #SidhuMooseWala murderers demanding 10Lakh or else they would kill me. Last week was stressful"

Ifeel blessed and thankful to @Tomarhricha

As per the reports the Chitrakoot police arrested a 31-year-old man who had allegedly sent an email to Manu Punjabi asking him to pay Rs 10 lakh.

He claimed that he was a member of the Lawrence Bishnoi group. The arrest was made from Uttar Pradesh's Bijnor area. Richa Tomar, deputy commissioner of police, has begun an investigation. Bigg Boss 14: Manu Punjabi Makes an Exit From Salman Khan’s Reality Show Due to Health Issues.

The man has been identified as Kulveer Singh Chauhan aka Tony and it seems that he was a drug addict. Sidhu Moose Wala was shot in broad daylight in Punjab. The horrific killing sent shockwaves across India and condolences poured in for the rapper.

(The above story first appeared on LatestLY on Jun 29, 2022 06:00 PM IST. For more news and updates on politics, world, sports, entertainment and lifestyle, log on to our website latestly.com).