Bobby Deol is a favourite of the internet. Every now and then, videos surface on Twitter that are hilarious. Most of them are scenes from his 90s movies. The recent one is a compilation of all the times he followed COVID-19 rules and foretold the world about how its done. 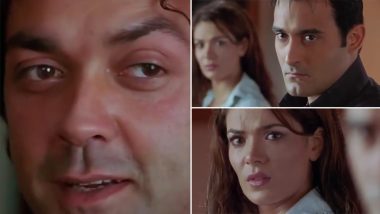 Bobby Deol is legendary, at least on Twitter. The internet is obsessed with him. Every now and then, videos from his 90s movies start a new thread on social media websites and they go viral like crazy. A few days back, a parody account had surfaced which has Bobby following and adhering to all COVID-19 Guidelines at a time when people didn't even know about this pandemic. The genius Deol can be seen performing COVID tests on Aishwarya Rai Bachchan or washing hands repeatedly, or wearing masks and others. Now he also has something to say on the Raj Kundra racket. Bobby Deol: Knew People Would Watch Race 3 and Realise I Exist

This Twitter handle has compiled together scenes from Kareeb, Dillagi, Bichchoo, Raqeeb and others. It's obviously hilarious to see all of these scenes. They are so relevant that the Twitter handle needs to be applauded for observing them all. Aashram Season 2: Adhyayan Suman Says He Has Recorded His Own Songs for the Role of a Rockstar in Bobby Deol’s Web Show

Lord Bobby predicted COVID-19 and told us to follow the safety precautions pic.twitter.com/gr4Dbl5dt2

Aware and not scared!

Lord Bobby was aware of coronavirus in 1999 pic.twitter.com/eaop1NMf32

Bobby has also seen a resurgence of sorts with his career after Race 3. He made his digital debut last year and even picked awards for it. His Aashram already got two episodes and now he has signed more movies. It's great to know that one of the most loving men from the 90s is back on everyone's radar.

(The above story first appeared on LatestLY on Mar 29, 2021 12:07 PM IST. For more news and updates on politics, world, sports, entertainment and lifestyle, log on to our website latestly.com).