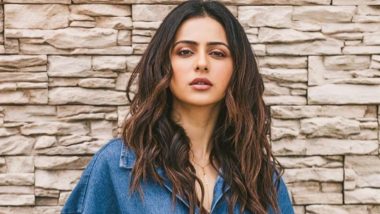 Bollywood actor Rakul Preet Singh has moved the Delhi High Court seeking urgent interim directions from the court restraining media from running shows or publishing articles against her in connection with the drug probe which emerged out following the death of Bollywood actor Sushant Singh Rajput. The matter is likely to come up for hearing in the coming week. SSR Case: Delhi High Court Tells Centre to Respond to Rakul Preet’s Plea Against Media Reports Linking Her to Rhea Chakraborty’s Drug Probe.

The petition filed through advocates Himanshu Yadav, Aman Hingorani and Shweta Hingorani claims that Rakul Preet has been in Hyderabad for a film shoot and was shocked to see media reports in the evening of September 29 to the effect that the Narcotics Control Bureau, Mumbai has summoned her to appear before it in Mumbai on September 24 in connection with the ongoing investigation in the Rhea Chakraborty's drugs case.

"...the Petitioner had received no such summons from the NCB at either of her Hyderabad or Mumbai addresses, and accordingly she remained in Hyderabad. The Petitioner's father, Col. Kulvinder Singh (Retd), decided to take the morning flight on 24.9.2020 to Mumbai from Hyderabad to ascertain the truth of such reports," the plea said. Bollywood Drug Probe: Rakul Preet Singh, Deepika Padukone’s Manager Karishma Prakash Reach NCB Office.

It is from the email dated September 24 from the NCB that the Petitioner learnt that case in which she has been required to appear has been registered as Crime No. MZU/NCB/15/2020, the plea said.

Earlier this month, Rakul had approached the High Court seeking its direction in order to ask the media not to telecast, publish or circulate on the TV channels, cable, print or social media, as the case may be, any content in the context of Actress Rhea Chakraborty's narcotic drugs case that maligns or slanders the Petitioner or which contains anything defamatory, deliberate, false and suggestive innuendos and half-truths in respect of the Petitioner, or to use sensational headlines, photographs, video-footage or social media links which invade the privacy of the Petitioner.

While issuing notice on the said plea, a single-judge bench of the high court presided by Justice Navin Chawla had said, "There has to be some restraint. Media gets to know info even before the officers themselves. Reputations are getting tarnished."

"It is hoped that media houses and TV channels would show restraint and abide by the Program Code and other guidelines while making any report in connection with Rakul Preet Singh," the bench had said further.

(The above story first appeared on LatestLY on Sep 27, 2020 12:02 AM IST. For more news and updates on politics, world, sports, entertainment and lifestyle, log on to our website latestly.com).