Box Office Report Card 2020: Ajay Devgn's Tanhaji The Unsung Warrior Is The Only Big Hit In the First Quarter; Tiger Shroff's Baaghi 3 Suffers Due To COVID-19

Coronavirus, CAA, bad content, flawed execution, all this and more made Bollywood lose a lot of money in the first quarter of 2020. 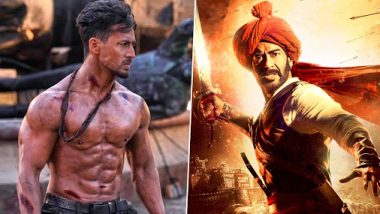 The first quarter of 2019 amassed Rs 1083.45 crore while 2020 could pocket only Rs 778.3 crore. That is enough to tell you how Bollywood fared in the first three months of the new year with no comeback in sight with the lethal spread of COVID-19.

After a few lackluster movies, in the beginning, Chhapaak and Tanhaji The Unsung Warrior clashed. While Deepika Padukone's first production venture failed to make much money, Tanhaji roared and soared. Since then many movies released but Ajay Devgn's warrior turn still remains the biggest hit of 2020 so far. There are a few small victories but none could come anywhere close to Tanhaji. Baaghi 3 could have been the next big hit in the first quarter but after a superb start, the film slowed down in the wake of the COVID-19 outbreak. Baaghi 3 Box Office: Is Tiger Shroff The Most ‘Unfortunate’ Superstar Of 2020? We Tell You Why!

January began with movies like Bhangra Pa Le, Simla Mirch, and Sab Kushal Mangal. They were mere token releases before they could be streamed on OTT. Bhangra Paa Le is on Netflix and so is Simla Mirch. Chhapaak and Tanhaji arrived at the theatres together. The latter obviously took a massive lead and ran for almost over a month. As of now, the film has earned Rs 279.55 crore which is the highest any movie has made so far this year.

After another token release of Jai Mummy Di at the box office, Street Dancer 3D arrived. There were extreme expectations from this film because the last two movies with the same team have been successful. Varun Dhawan and Shraddha Kapoor in a dance movie by Remo D'Souza is always seen as a winning combo. But the film disappointed as it couldn't earn more than Rs 68.28 crore. A flawed execution and people's misplaced emotions on showing Pakistan in good light ruined the game for the film. Panga starring Kangana Ranaut, Richa Chadda and Jassie Gill, too arrived on the same date and tanked. The films also got affected by anti-CAA protests all over the country.

Since then there has been a slew of mediocre movies that kept hitting the theatres and getting rejected by people. All hopes rested on Love Aaj Kal which starred once upon a time in love pair Kartik Aaryan and Sara Ali Khan. When it released around Valentine's Day, people couldn't believe how pointless it was and the film could only make Rs 34.99 crore despite witnessing one of the biggest first-day collections of 2020. It had earned Rs 12 crore and more on day 1. Love Aaj Kal was the biggest disappointment of 2020.

Shubh Mangal Zyada Saavdhan was promoted as a film that could start a revolution in the industry. A gay love story in a commercial film is unheard of. While the film was applauded for the attempt, box office numbers weren't too great despite being a typical Ayushmann Khurrana fare. He is the latest mood of the box office these days. Even this film could only amass Rs 60.78 crore. Bhoot Part One - The Haunted Ship collected what it should have but that wasn't enough for the box office, in general, this year.

In the midst of all this, one movie that raked in moolah slowly and steadily was Malang. That left everyone surprised. Despite poor reviews and a lot of memes, the film managed to go past the Rs 50 crore mark soon enough.

Things were starting to look up with Baaghi 3's release. The franchise has always delivered however maybe the movie. Tiger Shroff's stunts managed to audiences to the theatre no matter what. The same happened in the first half with the film registering the biggest first day total of 2020. But all for nothing. The Coronavirus scare curtailed its run at the box office. It had earned Rs 93.37 crore within a few days of its stay at the box office. But the biggest setback was for Angrezi Medium which had to wrap up with just Rs 10 crore more before the cinemas went shut. Angrezi Medium Box Office: Irrfan Khan’s Comeback Film Will Get Seriously Affected Due to Coronavirus Outbreak – Here’s How

But it will be wrong to blame Coronavirus for the sad state of box office income. Filmmakers and content are equally responsible for having a disastrous start in 2020.

(The above story first appeared on LatestLY on Mar 23, 2020 04:24 PM IST. For more news and updates on politics, world, sports, entertainment and lifestyle, log on to our website latestly.com).