Amitabh Bachchan and Emraan Hashmi starrer Chehre finally made it to the screen. Directed by Rumy Jafry, the film was a mystery thriller where one got to see Amitabh Bachchan as a retired lawyer, while Emraan Hashmi plays a business tycoon. The film also stars Krystle D'Souza, Rhea Chakraborty, Siddhanth Kapoor, Annu Kapoor, Dhritiman Chatterjee and Raghubir Yadav. 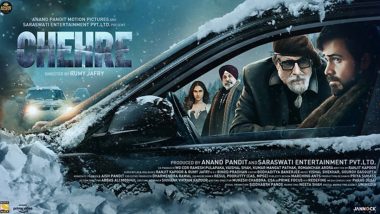 Surrounded by controversies and delays, Amitabh Bachchan and Emraan Hashmi starrer Chehre finally made it to the screen. Directed by Rumy Jafry, the film was a mystery thriller where one got see Amitabh Bachchan as a retired lawyer, while Emraan Hashmi plays a business tycoon. The story of the film is about a group of friends who are retired and meet in a bungalow and do mock trials with strangers.  Earlier, Chehre was supposed to hit the screens in July 2020 but was postponed due to the pandemic. Chehre Movie: Review, Cast, Plot, Trailer, Release Date – All You Need To Know About Amitabh Bachchan, Emraan Hashmi, Rhea Chakraborty’s Mystery Thriller.

The film also stars Krystle D'Souza, Rhea Chakraborty, Siddhanth Kapoor, Annu Kapoor, Dhritiman Chatterjee and Raghubir Yadav. This is also the first time that Hashmi and Bachchan have collaborated on a movie. Considering the cast, the director and the story, the audience had quite some expectations from the film. However, it looks like the film has failed to make a mark.

India Today: Chehre's biggest flaw is that it positions the trinity of Zaidi, Singh and Acharya as somewhat of the Justice League - pun intended - fighting to punish the wrong, without any real motive. Sans the trappings of the judiciary of the real world, in this microcosm, the law is absolute. The righteousness in the script is black and white, much like the uniform these men have donned all their lives.

News 18: Given the absurd twists and turns, the film comes across as a convoluted and tedious mess. It almost feels like Jaffery has botched up his own script. At almost two and half hours, the film seems slow and boring. The cat and mouse game between Bachchan and Hashmi’s character never picks up pace. Chehre isn’t unwatchable, but it is an inconsistent film has very little to offer.

Hindustan Times: Chehre is a thriller that fails to thrill. It's engrossingly shot but the twists, at times, are so predictable. On many occasions, the story written by Ranjit Kapoor comes across as unconventional, but sadly, just when things are looking exciting, it gets so stretched that it ends up losing its momentum. You wish there was some more thought given to the editing, and maybe then it could have been a crisper watch.

First Post: With classy cinematography by Binod Pradhan, and rather catching art decoration, Chehre had a lot going for itself. Hashmi, as is often the norm, is wasted in yet another average film, despite delivering a taut performance. Yadav carries intrigue with his few words and Kapoor matches Mr Bachchan’s act in tone. Chatterjee is measured. Chakraborty, whose appearance on screen conjures up sickening memories of bizarre media trials, looks vulnerable for her part. But she has little to do in the film, just like Krystal D’Souza, who is unable to evoke any emotion in the film.

Times of India: The atmospherics are good enough to make for a perfect crime mystery. But the story’s righteous demeanour and preachy tone, takes the edge off. The film’s urge to be seen as a thriller is curbed by its own pace and lack of reasoning. Whether Sameer is guilty of a murder or not aside, our verdict on the film is this — death by exhaustion. Chehre Movie Review: Amitabh Bachchan and Emraan Hashmi's Sincere Performances Save This Predictable, Preachy Thriller! (LatestLY Exclusive).

Prathamesh Jadhav from Latestly also watched the film and says, "Chehre scores with its arresting premise, the costumes, and the rich performances. Yes, it lacks that edge and that much-needed killer intent. One wishes if it could have been equally richer in terms of stitching the plots and the subplots in a more interesting and engaging manner. Mercifully, the sincere performances of the actors bring respect and dignity to the tale which is more predictable and preachy than thrilling!"

(The above story first appeared on LatestLY on Aug 27, 2021 10:31 AM IST. For more news and updates on politics, world, sports, entertainment and lifestyle, log on to our website latestly.com).