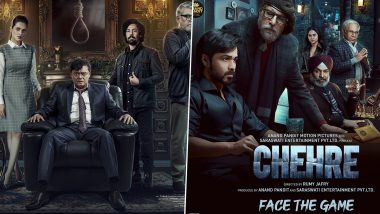 Filmmaker Rumy Jafry's Chehre has been a hot topic of discussion for quite a long time. The main reason for the same was Rhea Chakraborty, who is also an important part of the film. Produced by Anand Pandit, the poster, teaser, trailer of the movie grabbed a lot of attention and so fans are waiting with bated breath for the flick to release in the theatres. Earlier, Chehre was supposed to hit the screens in July 2020 but was postponed due to the pandemic. Chehre is a multi-starrer and just in case you want to know all things about it before its release, read on. Chehre Movie Review: Amitabh Bachchan and Emraan Hashmi's Sincere Performances Save This Predictable, Preachy Thriller! (LatestLY Exclusive).

Chehre features many actors which include Amitabh Bachchan, Emraan Hashmi, Krystle D'Souza, Rhea Chakraborty, Siddhanth Kapoor, Annu Kapoor, Dhritiman Chatterjee and Raghubir Yadav. This is also the first time that Hashmi and Bachchan have collaborated for a movie.

The mystery thriller sees Amitabh Bachchan as a retired lawyer, while Emraan Hashmi plays a business tycoon. The story of the film is about a group of friends who are retired and meet in a bungalow and do mock trials with strangers. Chehre Director Rumy Jafry and Producer Anand Pandit Explain Why Making a Mystery Thriller is a Tricky Affair (LatestLY Exclusive).

Amitabh Bachchan and Emraan Hashmi's film is all set to release in theatres on August 27, 2021.

Chehre's movie tickets can be booked via BookMyShow or PayTM for any theatre/cinema hall near you. You can also check Amazon Pay for the film's tickets.

While the movie will release for the audience on August 27, for critics, the makers had arranged a special screening. And as per our review, we have given Chehre - 3 stars. Stay tuned!

(The above story first appeared on LatestLY on Aug 26, 2021 07:34 PM IST. For more news and updates on politics, world, sports, entertainment and lifestyle, log on to our website latestly.com).