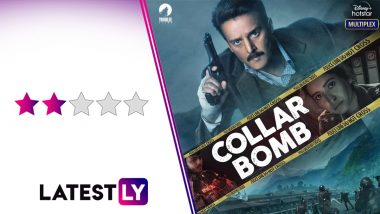 Collar Bomb follows Manoj Heisi (Jimmy Sheirgill), a top police officer in a hill station near Kasauli, who drives to his son's (Naman Jain) school to attend a prayer meet for one of the students there, who was recently murdered. At the prayer meet, however, a Muslim teenager who calls himself Ali (Sparsh Srivastav), who is armed with a collar bomb, arrives and hijacks the session.

Ali threatens to bomb the school and kill all the kids, if his certain demands are not met. He tasks Manoj to do four tasks for him, the completion of which allows the bomb to be defused. Just when you think this is another hostage crisis drama, which it is, Manoj realises that the tasks have a big connection with something sinister from his own past.

I do admit I did roll my eyes when afte State of Siege: Temple Attack on Zee5, we have another film about a Islamic terrorist carrying out a hostage crisis, that too arriving on the same day. Collar Bomb, however, does have a few surprises up its sleeve, when it makes us realise what we see here is not an act of radical terrorism, but something dark and personal. We have seen this kind of deceptive bait-and-switch narrative in films like David Fincher's The Game or closer home, Table No 21 and Aamir (interestingly both starring Rajeev Khandelwal). State of Siege - Temple Attack Movie Review: Akshaye Khanna Leads the Charge in this Tepid Thriller Based on the Akshardham Terrorist Attack.

Unfortunately, despite several moments of intrigue especially in the third act, Collar Bomb is not a patch on the aforementioned films. The twisty storyline is severely letdown by a dumbed-down screenplay filled with unbelievable flights of fancy and loopholes that makes you question the whole arrangement.

While I understand the antagonist's motivation for revenge, the whole operation of the person to carry it out makes little sense when you think of it. And there are loopholes aplenty. The major being, how does the perpetrator manage to carry out the whole agenda, without anyone noticing? Also the endgame of the person also has questionable holes in the plan. Only thing fair here, Collar Bomb does make it distraction-free, without needless subplots and songs.

After Your Honour, Jimmy Sheirgill is cast in a similar role. and the actor is decent in it. The rest of the cast are strictly okay.

There are a few surprises embedded in Collar Bomb, but not enough to question the plenty of loopholes and moments of disbelief also hacking into the narrative. The movie feels a missed opportunity to make a contained thriller that would catch us by surprise by being how good it is. Collar Bomb is streaming on Disney+ Hotstar VIP

(The above story first appeared on LatestLY on Jul 09, 2021 07:51 PM IST. For more news and updates on politics, world, sports, entertainment and lifestyle, log on to our website latestly.com).