De De Pyaar De: Ajay Devgn's Comment on the Age-Gap Between Saif Ali Khan and Kareena Kapoor Khan Gets a Thumbs Up from the Latter 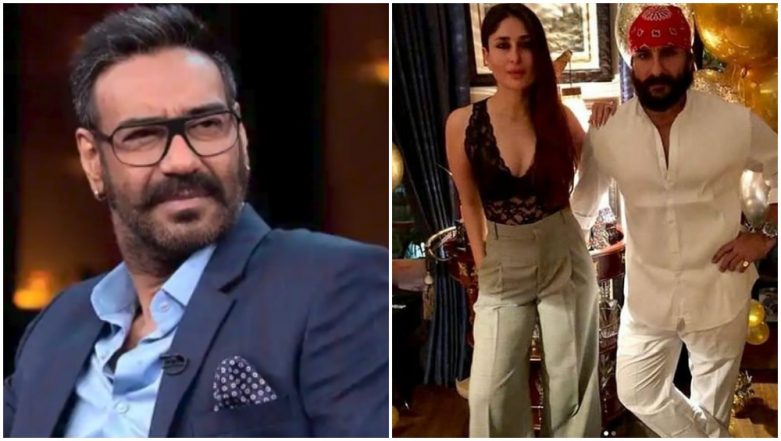 Remember how Ajay Devgn uses Saif Ali Khan and Kareena Kapoor Khan's example in De De Pyaar De trailer to prove that couples with age differences are often successful? While one may think if it ridicules the couple or takes a dig at their relationship, Saif, on the other hand, has no qualms about it. Yes, apparently the actor is fine with his reference and finds it quite amusing. Twitterati was busy making jokes on their mention but the actor and we believe his Begum are all cool with it. Tanushree Dutta Lashes out at Ajay Devgn for Retaining Alok Nath in De De Pyaar De, Calls Him 'Spineless Hypocrite'and 'Morally Bankrupt'.

As per a report in DNA, Ajay immediately called up Saif after the film's trailer launch to inform him about this reference. Since the Sacred Games actor is witty and has no such reservations, he was quoted saying, “Hey, that’s cool, man.” We're glad for he didn't make a fuss out of it though we'd like to hear if Bebo agrees with her man. And knowing her, it shouldn't be a problem either. De De Pyaar De Song Vaddi Sharaban: Ajay Devgn-Rakul Preet’s Vibrant Number Will Get You Grooving! Watch Video

De De Pyaar De revolves around a man in his 50s who falls in love with a girl half his age. Though everything's going fine in their relationship, troubles start arriving when his ex-wife, Tabu and family enter the picture. What follows next is a mad ride and we can't wait to see it on the big screen. De De Pyaar De is slated to release on May 17, 2019.