Deepika Padukone Is Cooking Something Special With Bernie Sander, Ranveer Singh, Siddhant Chaturvedi Give Hilarious Captions to Her Picture

Deepika shared a picture where she can be seen in a professional kitchen making faces while angry Bernie is sitting next to her. There are a few utensils laid in front of them on the table. The actress asked everyone to caption the image. 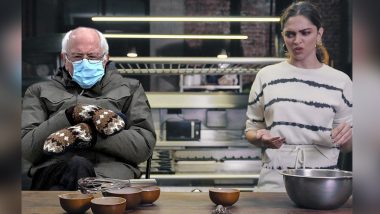 Deepika Padukone might have deleted her old pictures from her social media accounts but is making sure her new content is engaging and funny. The actress is known to share hilarious memes and photos made on either herself or her husband Ranveer Singh and her latest post was all about that. She caught up with the trend and has jumped on the Bernie Sanders memes train. She shared a version of the viral Bernie memes with her in it. Deepika Padukone Reveals Cookies Is Her Fave Food to Make, Says ‘I Am More Fond of Baking than Cooking.

Deepika shared a picture where she can be seen in a professional kitchen making faces while angry Bernie is sitting next to her. There are a few utensils laid in front of them on the table. The actress asked everyone to caption the image and Ranveer Singh and her co-star Siddhant Chaturvedi made sure they get as creative as they can. Ranveer wrote, "नमक ज़रा कम डालना बेटी” (Put a little less salt, kid) while Siddhant wrote, When you realise Rasode mein ye the," referring to the viral 'Rasode mein kaun tha' video.

On the work front, the actress has a busy year ahead. She will be seen in Shakun Batra's upcoming yet-untitled film that also stars Siddhant Chaturvedi and Ananya Panday. Deepika will also be seen in an untitled film with Amitabh Bachchan and Prabhas, and she has '83 in line where she stars opposite husband Ranveer Singh. From Hrithik Roshan’s Fighter To Shah Rukh Khan’s Pathan, Here’s Looking At Deepika Padukone’s Upcoming Films!

In an interview to Femina, Deepika Padukone was quoted as saying, “This year I am going to be doing five films. I think in some ways the pandemic panned out creatively because it was a time when people in the arts were writing and they were coming to me with stories I really connected with. By August/September, I knew what my line-up was for the next couple of months.” She will also unite with Bollywood star Hrithik Roshan for the first time for an action-adventure, Fighter, which will be directed by Siddharth Anand.

(The above story first appeared on LatestLY on Jan 23, 2021 06:38 PM IST. For more news and updates on politics, world, sports, entertainment and lifestyle, log on to our website latestly.com).