Did Akshay Kumar Really Not Visit Canada in the Past Seven Years As He Claims? This Old News Says Otherwise!

Akshay Kumar should have checked his photo albums first before he made such a statement! 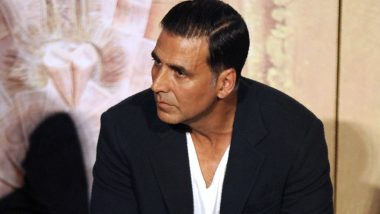 Akshay Kumar's Indian citizenship has been the subject of many debates on Twitter. Though he has made his image as that of a nationalist icon, Akshay Kumar reportedly has a Canadian passport, and therefore, is not an Indian citizen. While the nationality that the actor has chosen for himself is his personal choice, Akshay Kumar's various defences and contradictory statements make things confusing. From calling it dual citizenship (India doesn't accept that) to honorary citizenship (Canada hasn't conferred him that), Akshay Kumar was running out of excuses to defend his Canadian nationality. After Accepting to Be a Canadian Citizen, Akshay Kumar’s Old Video Calling ‘Toronto Is My Home’ Goes Viral.

The controversy gathered more storm when Akshay's allegiance for the ruling party in India became more prominent. So when fans didn't find Akshay among the celebs who voted in the ongoing Lok Sabha Elections, questions were again raised on his nationality.

To end all debates, Akshay Kumar put out a post on social media where he confirmed that he has a Canadian passport and why there is so much fuss over it. Akshay Kumar Comes Out Clean about His Citizenship, Says ‘Never Denied That I Hold a Canadian Passport’.

In the same post, he also mentions that he has never visited Canada in the last seven years. However, an old news article has now resurfaced which points out that this claim is false - Akshay had gone to Toronto, Canada for the wedding of Tina Virmani, the sister of actor Vinay Virmani in 2014. Akshay Kumar's fan-club had even shared a picture of Akshay during the sangeet.

If you observe closely, Akshay is sporting the bearded look he had used for the movie, Gabbar is Back, which came out in 2015. The wedding was covered by some of the major publications then, with some claiming that Akshay had bumped into his ex, Shilpa Shetty's husband Raj Kundra.

Since the wedding happened and it was covered by media, we wonder what to make of Akshay Kumar's claim that he has never visited Canada in the last seven years. If our maths is true, then 2019 - 2014 = 5 years! Akshay should have checked his photo albums first before he made such a statement!

(The above story first appeared on LatestLY on May 09, 2019 04:02 PM IST. For more news and updates on politics, world, sports, entertainment and lifestyle, log on to our website latestly.com).