Dimple Kapadia celebrates her birthday today and on her birthday, we thought of telling you how she became the highest-grossing Indian actor worldwide in 2010. It has a lot to do with some time-bending and a director named Christopher Nolan. 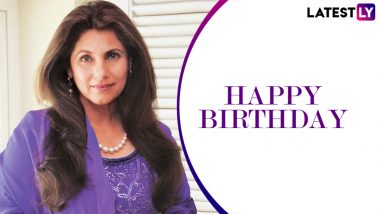 Today is Dimple Kapadia's birthday. On this special day, would you believe us if we tell you she is the only Indian actor who has one of the highest-grossing movies worldwide in 2020 to her name? We aren't making this up at all. As per BoxOffice Mojo, her movie Tenet, directed by Christopher Nolan, takes fifth position in the highest-grossing movies of the world in 2020. The film earned $363.7 million globally. In fact, it is placed higher than Robert Downey Jr's Dolittle. A Chinese Film Beats Tenet And Bad Boys For Life To Become The Highest Grosser Of 2020, Courtesy COVID-19

Dimple Kapadia played an arms dealer in Nolan's yet another mind-bending feature. Although her role was pretty short, she managed to win many accolades. Many appreciated her ability to be a scene-stealer every time she appeared on the screen.  It is said that the audition tape for the role was shot in 2019 by Homi Adajania before Angrezi Medium. Later, Nolan met her in Mumbai and she was finalised. Christopher Nolan Opens Up About Dimple Kapadia’s Casting in Tenet

Last year was a downer with the COVID-19 pandemic forcing all of us into a lockdown. Theatres were shut but when North America and others started opening up gingerly, Tenet became the first tentpole release that saw people returning to the theatres wherever it was screened.

(The above story first appeared on LatestLY on Jun 08, 2021 08:10 AM IST. For more news and updates on politics, world, sports, entertainment and lifestyle, log on to our website latestly.com).