He was an actor par excellence and can be counted among few actors who tasted success on stage, television as well as in films. 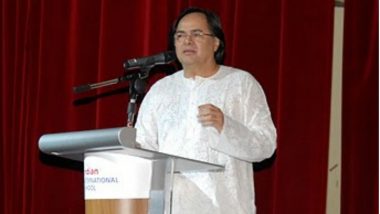 Mumbai, March 25: Farooq or Farooque Shaikh would have turned 70 today. The actor, who was known for his natural acting and easy charm had always stood out from his contemporaries. Though he left the world on 28 December, 2013, the world today celebrates an artist who gave great memories to people he worked with and left his audiences with pleasant memories. Farooq Shaikh was an actor par excellence and can be counted among few performers who tasted success on various mediums such as stage, television, radio and films. The actor made his film debut in the movie 'Garam Hawa' and played the son of Balraj Sahani. He also worked with Satyajit Ray in the maverick director's only Hindi film Shatranj ke Khiladi. Farooq showed his command on stage and was part of the famous play called "Tumhari Amrita", an Indian adaptation of American play "Love Letters". The actor known for his natural acting, formed a formidable on-screen pair with his co-star of many films, Deepti Naval. In the early years of 2000, Farooq hosted the popular entertainment/biographical show on the lives of actors called Jeena Isi Ka Naam Hai on TV.  No wonder, that Google has celebrated his 70th birthday with a doodle dedicated to him.

Farooq(ue) Shaikh studied at St. Xavier's College, Mumbai and did theater in college with Shabana Azmi, who also studied in the same college. Farooq also met his girlfriend/ future wife, Roopa, while studying at St. Xavier's College. He later joined Indian People's Theatre Association (IPTA) and acted in several plays before making his debut in MS Sathyu's masterpiece Garam Hawa, a film based on partition. How many actors can debut in a film which had Balraj Sahani in the lead role and yet manage to get noticed? Farooq Shaikh did that and that alone speaks volume of his talent as an actor.

Farooq Shaikh's range as an actor was remarkable. He could do pathos and comedy with same elan and dignity. He mostly worked in art house or films which were called part of parallel cinema and delivered memorable performances. He acted in films like  Shatranj Ke Khiladi (Chess Players) (1977), Noorie (1979), Chashme Buddoor (1981), Umrao Jaan( 1981), Bazaar (1982) Saath Saath(1982), Rang Birangi,(1983) Kissi Se Na Kehna (1983) Ek Baar Chale Aao (1983) Katha (1983) Ab Ayega Mazaa (1984) Salma (1985) Peechha Karo (1986) Biwi Ho To Aisi (1988). These are films which would make any actor proud, but the best compliment for Farooq saab as he was fondly known, would be to say that these films would not have been the films they were had it not been for Farooq Shaikh. Ask any film lover who has seen these masterpieces and he will affirm that it is not just a compliment, but the truth. Truly, Jeena Isi Ka Naam Hai.

(The above story first appeared on LatestLY on Mar 25, 2018 01:12 AM IST. For more news and updates on politics, world, sports, entertainment and lifestyle, log on to our website latestly.com).