Haseen Dillruba starring Taapsee Pannu, Vikrant Massey and Harshvardhan Rane is streaming on Netflix. Reviews are in and so, we have compiled a few for you. Critics seem largely divided on whether or not this movie can be called a great watch. 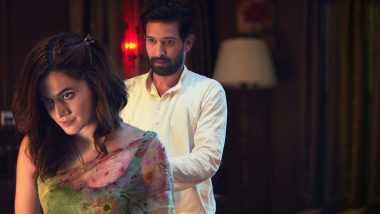 Taapsee Pannu and Vikram Massey's Haseen Dillruba is streaming on Netflix. The film has managed to get everyone curious about its storyline as it is a thriller. The trailer hinted towards adultery as well and then the explosion happens. The film has been watched by many critics and it seems there is no unanimous conclusion to it. Check out their reactions here... Haseen Dillruba Song Lakeeran: Taapsee Pannu And Vikrant Massey Feel No Love In This Melancholic Amit Trivedi Composition (Watch Video)

Mint Lounge: Structurally, the film has a lot in common with The Usual Suspects. But that film had about a dozen memorable characters, whereas Haseen Dillruba expends its energies making Rani and Rishabh interesting, and has little left over for the rest.

Money Control: You hear Billie Eilish sing, ‘My Lucifer is lonely’ many times in your head as the film captures jealousy in Jwalapur… This film is delightful and different from the usual ‘Indian Originals’ fare we get to see on OTT platforms like Netflix. Perhaps, if there are men like Rishu out there, they will learn to read more instead of fixing appliances for aunties. Perhaps this will encourage more women to not pretend to be the ‘susheel’ bahu who makes ‘khasta kachoris’ only, but something more. Perhaps. Perhaps. Perhaps.

FirstPost: The one thought-provoking aspect of Haseen Dillruba’s screenplay is its portrayal of the fallout of an extra-marital affair in a conservative small town where a ‘wayward’ woman has no chance of disappearing into the madding crowd as she might in a large city. This apart, the film is shorn of any social insights. I recall feeling unnerved and enraged for months after watching Tere Naam and Raanjhanaa. Haseen Dillruba is too thin and flat to sustain even anger.

Quint: While the narrative is consumed by an overarching theme of revenge with pulpy flamboyance it just seems like it starts taking itself too seriously and that’s when the messaging becomes convoluted and deeply problematic. Putting any kind of toxic relationship on a pedestal and calling it as the supreme example of love and sacrifice is completely unacceptable and one wishes that those highly disturbing scenes were handled with more sensitivity and care. While they may be in a make-believe universe where passions run high, the treatment feels like Haseen Dillruba endorses these twisted tricks which to be honest is quite off-putting.

(The above story first appeared on LatestLY on Jul 02, 2021 02:09 PM IST. For more news and updates on politics, world, sports, entertainment and lifestyle, log on to our website latestly.com).